Bringing Broadband Up To Speed 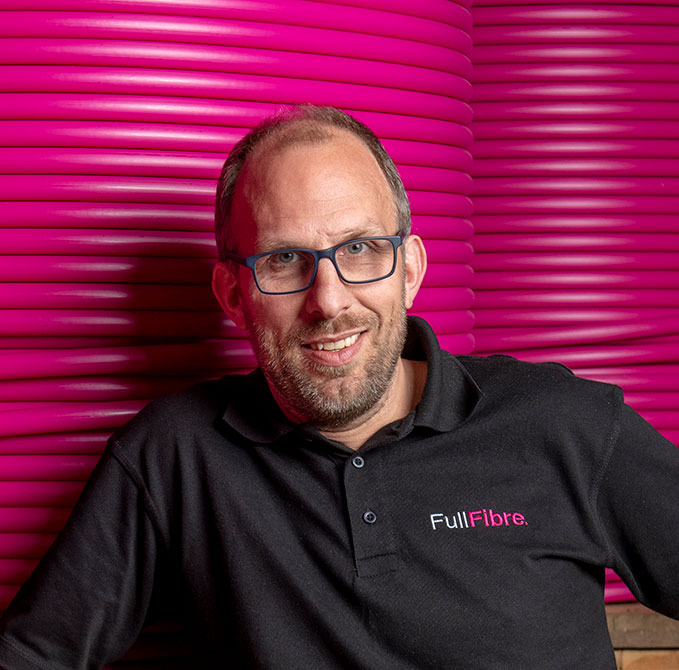 For a man preoccupied with the latest developments in 21st century technology systems, Dan Jones’ ancestral history marks quite a contrast to today’s ever-changing IT world.

The engaging telecommunications specialist is a direct descendant of the Burmans, Warwickshire’s oldest farming family dating back to the Domesday Book. Burmans lost their lives at Waterloo and El Alamein while their distinguished ranks include five Mayors of Stratford on Avon, a High Sheriff of Warwickshire, a Lord Mayor of Birmingham, a Pro-Chancellor of Birmingham and other notable public figures.

Intriguingly, Dan’s family can even boast historic links to the world’s most famous playwright, with a Tudor branch of the family former next-door neighbours to the Hathaways –  and in the late sixteenth century one Stephen Burman supervised the will of Richard Hathaway, the Bard’s father in law.

It’s a long, winding road from rubbing shoulders with Shakespeare’s family nearly 450 years ago to carving out a niche in today’s ever-evolving world of broadband – but Dan’s clearly the man to span the centuries and add further lustre to the Burmans’ history.

“The family are pretty proud of their Midlands heritage,” says Dan. “The Burman family is well-known, with Mayors of Birmingham and Stratford and industry connections. My grandfather Alfred was from Coleshill and his farm was where Birmingham Airport now stands.

“He owned a garage, Northfield Motors, and ran a driving school, during this time they moved to Bromsgrove and sent my mother, the youngest of four girls to the Alice Ottley School, which is now the Royal Grammar, the same school my son attended.   Following the sale of the motor business they all moved down to Devon where he became a property developer.”

There’s clearly more than enough in the Burman family locker to put together an entire book of reminiscences, but we are meeting today to discuss Dan’s latest business venture, lightning-fast fibre-optic broadband specialists Full Fibre, a far cry from Shakespearean anecdotes.

Born in Exeter, Dan followed his father, who had worked in the world of two-way radios and pocket pagers, into the communications industry, beginning working life at 19 with Scope Communications at Totnes in Devon, manufacturers and suppliers of pagers.

“I went to college, did a BTEC in Electrical Engineering, the world of electronics fascinated me. We  supplied the likes of Honda and Marks and Spencer with pagers.  I moved to the Midlands around 1995-96 as Regional Sales and Support Manager.

“It was great fun, we won a big contract with M&S.  My wife and I kitted them out with till call systems.  It was very lucrative, they went on to win contracts with Sainsburys and Tescos.  I was given the job of supporting supermarkets if the systems went wrong.

“I found myself sitting at home doing nothing.  I said to my boss ‘This is crazy, I am going mad here. Can I go self-employed?’ I came up with this scheme that they would pay me per job.”

Like many entrepreneurial case studies, Dan’s career was to involve several twists and turns along the way, and his move to self-employed status proved an inspired decision.

“I started manufacturing oil alarms for levels in commercial oil tanks. It was distributed by Centre Tank Services of Minworth, the UK’s leading distributor of fuel dispensing equipment. We started with one product and it quickly grew into 12 different products. The firm was called Dove Technology and we continued to distribute paging equipment for Scope.

“Both sides took off, during the journey I converted my family home and took on staff. But having a newborn and staff in my house didn’t work. We grew to 14 staff, the business had two arms, manufacturing oil alarms and communications.

“We had our own premises in Worcester. The profit margins were good and thanks to a contract with the G4S supplying the immigration centres we were getting bags of pager repairs coming in every week. Then we got a really good offer and I sold Dove Technology in 2010. I was in my early 30s and financially stable.”

The sale brought Dan, a keen cyclist, to a crossroads in his life, and he came up with a novel idea. “I was fortunate in that I could walk into my local bike shop and say ‘I will work for nothing. If you like me, you can keep me on.’ Worcester Cycle Centre is the largest bike shop just south of Birmingham – cycling and knowing about bikes are two different things. I was there for four years – and they soon got round to paying me.”

Never one to let the grass grow under his feet – or his cycle tyres – Dan launched his own bike venture, Dove Bikes, in 2014, distributing bikes and cycle parts. But fate was soon to draw him back into the world of IT and communications.

Dan had known local Worcester-based IT entrepreneur Redmond Peel, who had gradually built up his Airband wireless broadband network business over many years, and was invited to join the telecoms revolution. “I had known Red from church, his wife Miranda and my wife Anna were friends from a very early age.

“I was down there every other week for Airband but after two years it got too much. There was a lot of travel and I left at the beginning of 2017. They have continued to grow and have gone on to win more tenders to supply super-fast broadband to rural areas.

“I love business growth, the early stages of evolution and getting somewhere from nothing. When it is a machine and you are doing the same stuff, for me it gets tedious and repetitive.”

It seems that Dan’s career has evolved over the years in cycles (on occasions quite literally) and he left Airband to return to the bike world, working as UK sales manager for German electric bike specialists Riese & Müller.

“Outside Germany, under my stewardship the UK experienced the biggest growth of all the countries.  I set up a national network of distributors with bike shops all over the UK and Ireland. The growth in electric bikes is huge, it was so enjoyable, witnessing all ages embracing the freedom and excitement of the bicycle.  Some of my fondest memories with a fantastic, passionate family firm.”

But the Jones career cycle turned back to the IT sector once again after he was invited by a contact at Devon County Council to write a tender for Oxfordshire-based wireless internet services provider SugarNet Ltd, whose founder Oliver Helm enjoyed the process so much he suggested further collaboration on tenders.

“Then we said “why are we doing tenders for other people? Why don’t we do it ourselves?” It was the launch pad for the company that was to become Full Fibre, we had learned so much from others and from our own networks (Dan had already built Rural Comms, a wireless network in Devon delivering to luxury lodge parks) that we were confident we could be wholesale, build fast and build full fibre, fibre all the way to the property.

“We self-funded it, there were three of us, Oliver Helm on the technical side, Oliver Lippiett on the operations side and I was the sales side. Being wholesale, we build the fibre network and the ambition is to get the major players like TalkTalk, Sky, Virgin, Vodafone, onto the network.

“We quickly won a tender to build an element of Leominster, took on staff and then won a contract to fibre a town, Ledbury, for Gigaclear. That really sparked investors to say ‘something is of interest here’, we won investment from Basalt Infrastructure Partners, an independent infrastructure investment firm. It was their first investment in a mainland UK fibre company, they now have a majority stake in Full Fibre.

“We have seen huge growth. We have announced 12 towns where we are building, including Leominster, Shrewsbury, Bayston Hill, Ross-on-Wye, Oswestry, Wem, Droitwich, Stourport-on-Severn, Malmesbury, Cinderford, Cam and Dursley and we are building networks within those towns so that all the residents and businesses can have futureproofed fibre broadband.

“We refer to them as the forgotten towns. Lots of our competitors have focused on cities giving them multiple choices, but if you go to these towns you find businesses there that are on appalling broadband experiences – they are still stuck on copper connections.

“When we went into Leominster a long established building company could not send architects plans from their head office because the Internet was not capable of it. They had to drive somewhere else to download and upload the architects plans.

“You go into the middle of Shrewsbury and businesses are getting 10 megabits. For the majority of businesses that is not workable. The national average is around 60Mb, but even at that, due to the nature of copper, the experience varies.”

After around 30 years in the IT world in a variety of guises, Dan can appreciate the difficulties slow broadband speeds can bring to businesses in an increasingly hi-tech universe, where time is of the essence.

“In this country we have tried to sweat the asset by going for an in-between fibre. My brother lives in the Alps and they get faster speeds in an Alpine village than they do in the middle of Shrewsbury. BT has had the stronghold and the traditional ‘fibre’ they delivered is inferior because you are still some distance from the cabinet, the BT green box – rather than deliver fibre to the properties as most counties in Europe have, in the UK we stopped the fibre at the street cabinet.

“80 per cent of the country are still suffering from slow speeds. They did all the cities first, and the people in semi urban and rural areas were left behind. There is a load of work to do, companies are squabbling, there are some easy wins within the cities…cities have lots of choice but rural companies have got nothing, and we can benefit from that.

“Because of the areas we are in, there is no competition. If the likes of TalkTalk want to hit places like Shrewsbury and Leominster, they have to come aboard. We are building where currently others are not, the sky is the limit, there are plenty of properties left and there are many more towns out there. We are soon to announce the next round of towns, the investment has transformed the business.

“We have a good range of ISPs on board now with many connected customers and are in the process of rebranding our consumer-facing name to Fibre Heroes – we aim to educate the customer so they fully understand what is causing the broadband pains they are experiencing and are empowered to make the right changes and choices for them. Our CEO Oliver Helm has a great vison, a clear understanding of the UK marketplace and a knowledge and passion for the technology to make sure we are building networks now that will power the future. It is looking good, we were fortunate in that we came into the market at just the right time, with an inside knowledge and personal experiences at all levels.”

With such an array of distinguished ancestors Dan Jones would appear to be the latest in the Burman family tradition to aim for the stars and carve a distinctive niche in life. Or, as he says: “You can do anything you want to if you set your mind to it.”