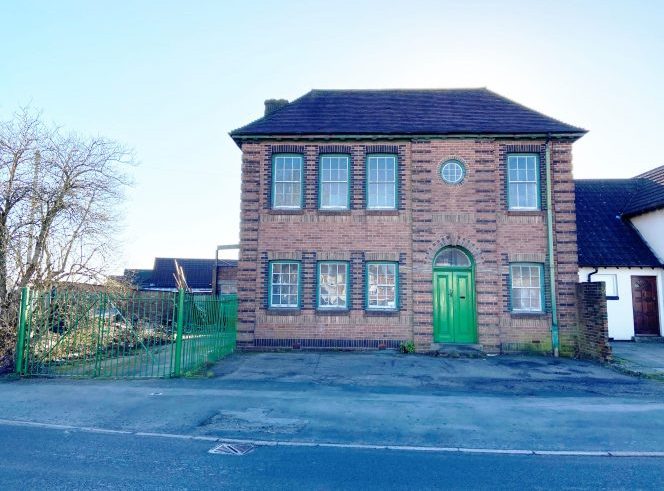 A dilapidated former button factory in Birmingham could soon be done up for a fresh future after it appears in Bond Wolfe Auction’s next online sale later this month.

Repair and refurbishment could soon bring the eponymous Button Factory, based at the Maypole Works in Maypole Lane, south Birmingham, back into service as industrial premises.

Alternatively, the building could be demolished and redeveloped to create new homes on the quarter-acre site, subject to planning permission.

The site has been used for button manufacturing since at least the 1930s, one of the key industries that helped make Birmingham renowned around the world as the “city of a thousand trades”.

But recent years have not been kind, and while it extends to more than 10,000 sq ft behind an attractive period façade the factory is largely in a poor state of repair.

As a result it is listed for sale in the Bond Wolfe Auction’s online auction on 31 March with a guide price* of just £135,000.

Ian Tudor, managing director of Bond Wolfe Auctions, said: “The size and scope of The Button Factory makes it highly suitable for redevelopment for a variety of potential uses.

“The property comprises of a range of offices, workshops and stores with a yard area, so it would still suit commercial operations of different sorts.

“But the site could also be used for the development of new homes if planning permission was secured.

“It sits in a prominent position on Maypole Lane in a popular and well-established residential neighbourhood near Kings Heath, Solihull and Hollywood.

“It is the kind of adaptable property that has become increasingly popular to a wide range of investors and developers, and given the attractive guide price we expect a high degree of interest from bidders on auction day.”

Mr Tudor added: “Our last online auction in February saw an impressive 23,000 people logging on to watch proceedings, with 3,500 registered to bid during the day.

“Our use of the internet has opened our auctions up to a global audience, and UK properties like The Button Factory are in the sights of a growing number of British and international investors.”

The former factory is just one of 226 lots listed for Bond Wolfe Auction’s next online auction from 8.30am on Wednesday 31 March.

This follows Bond Wolfe Auction’s February event which saw the largest ever number of lots achieving a record sales figure of £24.6 million with an enviable success rate of 96%.

The auction will be livestreamed via Bond Wolfe Auctions’ website with remote bidding by proxy, telephone or internet only.