Breaking Bread – dining with the experts 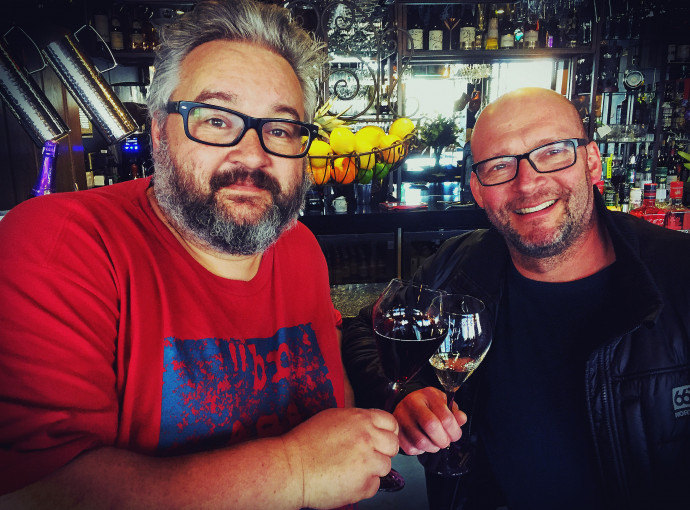 Either way, opportunity knocks for foodies as 1884 Wine & Tapas Bar presents the debut dinner with two of Hull’s most popular characters from the media, arts and culture scene.
Dave Lee makes films, writes plays and his restaurant critiques are the envy of other scribes for a style which is engaging, entertaining, informative and, when required, hard-hitting.
A Dave Lee review is coveted by restaurateurs across the region and makes the Yorkshire Post’s Saturday supplement a must-read. He has also written on food for BBC Good Food and Welcome to Yorkshire and has contributed to The Kitchen Cabinet on BBC Radio 4.
Dave is in demand for broadcast interviews and he is a prominent member of the region’s Twitterati as well as a former judge of the restaurant category for the Remarkable East Yorkshire Tourism Awards (REYTAs).
Andrew Pearson is best known as a Hull-based theatre director and producer. He was responsible for running the twice-yearly Heads Up Festival in the city as well as co-founding the venues Fruit and Kardomah 94 with his company E52. The company continues to produce new work for the theatre as well as film.
In a previous life, while in London for 15 years Andrew worked as a bar manager and sommelier at restaurants such as The Brackenbury, Kensington Place and the Michelin-starred River Cafe run by Rose Gray and Ruth Rogers, featuring chefs such as Jamie Oliver, Theo Randall and Hugh Fearnley-Whittingstall. On returning to East Yorkshire he worked for the company Wicked Wines including delivery of tutored wine tastings.
They were brought together by Phil Ascough, a media and PR consultant whose clients have included some the very best restaurants in the Hull area – including three REYTAs winners – and who is prepared to overlook the fact that Peters and Lee actually had two top 10 hits. He’s backing Pearson and Lee to do better than that.
Phil said: “The growth of the food industry has been phenomenal and the restaurant scene in and around Hull has changed dramatically even in the last five years, since 1884 Wine & Tapas Bar evolved from The Wilson.
“We have two acknowledged experts on our doorstep who can share their first-hand experiences of what it’s like to work in a top restaurant, often under intense pressure, and what it’s like to give diners an honest insight into an establishment’s culinary capabilities. It promises to be a fascinating and fun event, although we should warn that as food is big business, there may be some industrial language!”
After the introductions our speakers will spend the evening visiting diners at their tables to chat about the food, the wine and whatever else comes to mind.
Dave can be expected to share some of the secrets of his approach to reviewing restaurants – what to look for, the special touches that signify attention to detail, the delightful dishes that you never forget and maybe the culinary catastrophes that you wish you could!
Andrew will expand on his remarkable career working with some of the biggest names in the business and some of the most awkward customers. He’ll also advise on the best way to drink wine and he’ll maybe explode a few myths. White wine with fish and red with meat? Not necessarily.
Breaking Bread is an evening with two experts who are occasionally outspoken and always good company. It’s a must for anyone who loves food and wine, and particularly for anyone who serves it.
Breaking Bread will take place at 1884 Wine & Tapas Bar, Wellington Street West, on Thursday, March 12, with a start time of 6.30pm for introductions at 7pm. Priced at £45 per person the evening will begin with a glass of cava on arrival followed by three courses each accompanied by a wine from the restaurant’s stunning selection.
The Pablos Platter of focaccia, olives, Padron peppers, cured meats, feta, Manchego and mixed nuts will be served with a Musso de Casa Rojo Rosado.
A Raimat Ventada Organica Blanca Costers del Segre will accompany the Pescado Medley of five-spice mussels, Raimat Ventada battered prawns, sea bass fillet with samphire and tabasco, baby spinach and a mixed pepper salad.
A Pablo Old Vina Garnacha has been selected for the meat course of lamb rump with sweet potato puree and red wine jus, chorizo skewer, fennel and cumin braised belly pork, tender stem broccoli, wilted kale and buttered peas.