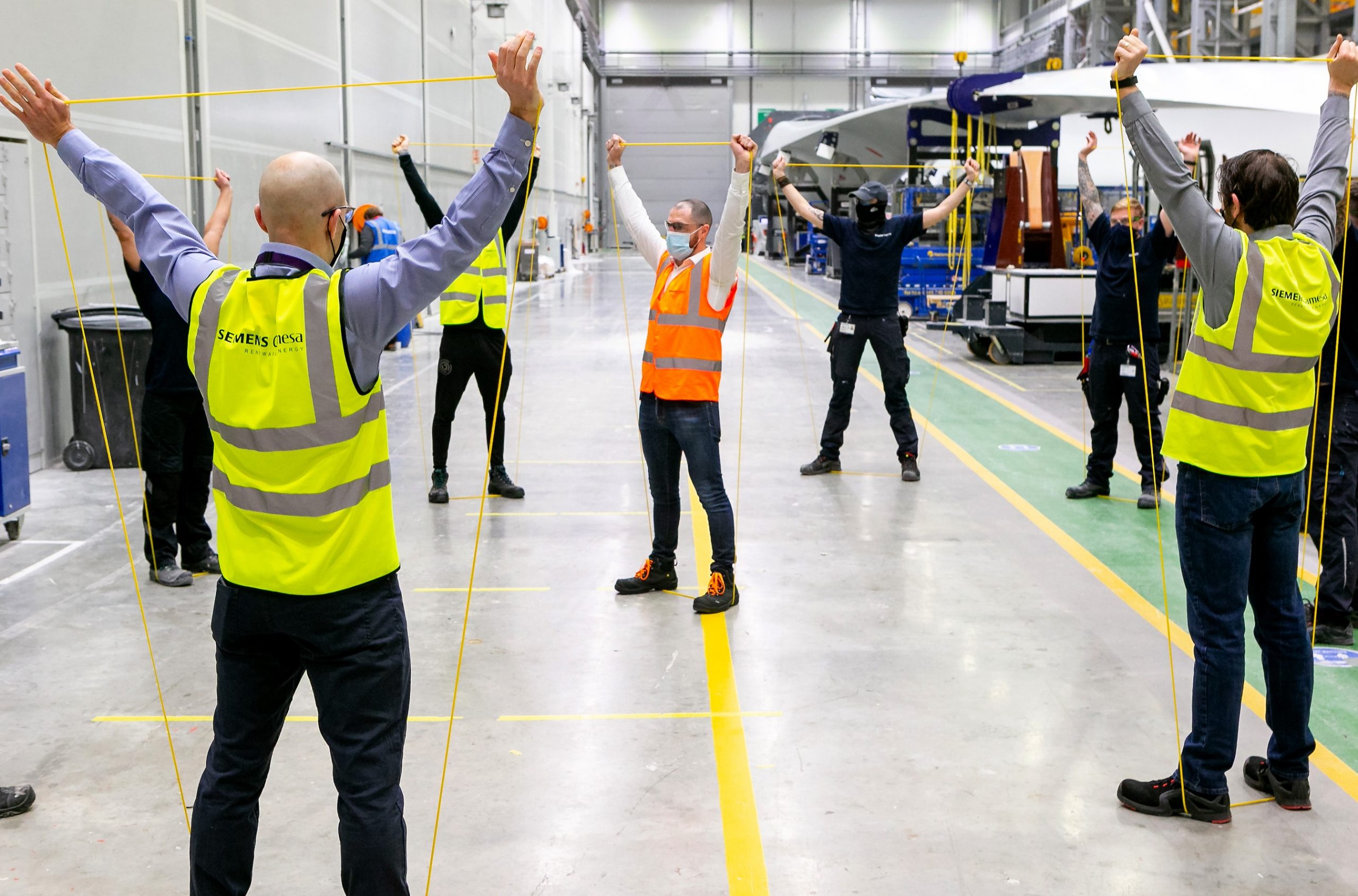 Workshop warm-ups and canteen smoothie stations are helping to transform the lifestyles of hundreds of staff at one of the region’s major employers after bosses invested in putting the wellbeing of workers first.

Management at Siemens Gamesa in Hull say the programme is bringing benefits for its team of more than 750 people from wind turbine assembly lines to office staff.

Now the company has agreed a new four-year deal with the man who devised the initiative, Commonwealth boxing champion Tommy Coyle.

Andy Sykes, plant director, Siemens Gamesa, said: “Prior to launching our programme, we looked at several national health and wellbeing providers. Tommy’s offering stood out as he was relatable and our workforce immediately connected with him.

“His presence has really been felt. Coyle Health and Wellbeing has inspired and engaged our people to make small, healthy lifestyle changes. They have provided the wellbeing education, support and tools our employees need.

“We know that good health and wellbeing is linked to employee engagement and organisational performance and we see that it is well worth the investment. We are looking forward to developing the programme with an even greater focus on personalised support and resilience this year.”

Tommy, who won the Commonwealth lightweight title in 2018, retired in 2019 to launch his Boxclever community project and focus on the transition from boxing to business.

He will be back at ringside next week having been recruited to assist in Carl Frampton’s corner as the Belfast boxer contests the WBO world super-featherweight title in Dubai on Saturday, April 3.

After the fight, Tommy will rejoin his team of 30, building a business portfolio which includes three gyms, the contract with the global renewable energy giant – and the ambition to do more.

When Tommy heard that Siemens Gamesa wanted to set up a wellbeing programme befitting a world class business he spent 18 months researching the company and its employees.

The solution is the Coyle Health and Wellbeing programme, which is built on the pillars of move well, eat well, think well and sleep well. It is led by Joel Shortland, Tommy’s Corporate Wellbeing Manager, and will be developed further during the life of the contract.

Tools and techniques include resistance bands for the workouts, wellbeing planner boards around the site and regular health checks for staff. The innovative approach brings inspirational surprises such as smoothie Fridays in the canteen, and head-clearing jigsaw puzzles that colleagues complete jointly, adding pieces when they are passing.

With the new contract agreed, the next step will be the launch of an app to give Siemens Gamesa staff instant updates on their health and wellbeing needs.

Tommy (right) said: “Our USP is identifying problems and providing solutions. I said I would get my overalls on and explore every segment of Siemens Gamesa so I understood every role. I didn’t want to give them an off-the-shelf product.

“We looked at diet change, choices and habits. Working in one of the segments was extremely physical – one guy lost five pounds a day and he thought it was great but he was at risk of becoming severely dehydrated.

“When we started, we understood wellbeing but we were punching above our weight in business terms. Now we have learned a lot about the corporate side. We signed a contract in 2018 and then we did an extension. Now we have just agreed a four-year deal and we want to build on that.

“The engagement levels have been fantastic. We run sports days where families can get involved, we provide 365 recipes a year so we can get families cooking together, and we have three gyms and a fourth on the way that they can access.

“During lockdown we have gone above and beyond, delivering equipment to people’s homes and holding one-to-one health assessments via Zoom.

“The app is a big investment for us. It will take everything to the next level and even tell people how charged up they are – like a phone battery!”

What the workers said

Ian Robinson, a group lead at the factory, has lost more than a stone and a half since the end of January after replacing his passion for chips with a delight which he discovered at his first Coyle Health and Wellbeing boot camp – a smoothie of almond milk, diet protein powder, peanut butter, chia seeds, desiccated coconut and ice.

He said: “I make it up at home and put it in the fridge overnight and bring it with me. And I down it like a pint!”

Nicola Watson, an assembly operative, said: “I’m not really into the gym so the exercises help me to get a proper stretch out, working muscles and warming up before a shift. It’s a physical role that we have and this makes us more mindful of being healthy and reduces the risk of pulls and strains.”

Danny Parsons, another assembly operative, said: “Sometimes when you start your shift you can be a bit flat and this helps to get the blood flowing.  I’m feeling fitter and it’s good for mental health as well.”