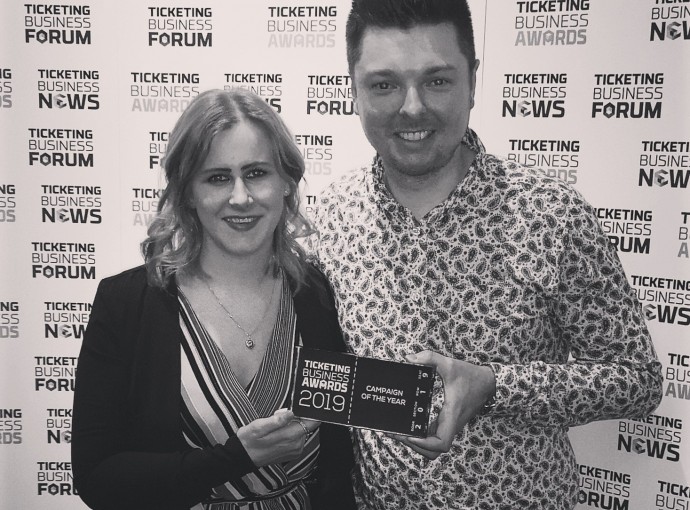 The winners of TheTicketingBusiness Awards 2019 were announced on Tuesday, April 9, during a private ceremony at Emirates Old Trafford, Manchester.
The arena’s marketing team won the Campaign of the Year award for its Open To All campaign. Paul Savage, head of entertainment sales and marketing, and Danielle Madden, marketing assistant, were handed the award, beating campaigns by Amazon Prime Day; “Ed Sheeran ÷ Stadium Tour Fan Engagement” – Kilimanjaro Live/DHP/AEG/FanFairAlliance/Victim of Viagogo; Major League Soccer side Atlanta United; Basketball Club Zalgiris Kaunas, Lithuania; and “Beautiful, The Carol King Story” by Ticketek/Michael Cassel Group/Her Majesty’s Theatre, Australia.
The Open To All campaign showcased the Bonus Arena’s opening, charting the moving in period and focusing on interactive social content to show off the new facility. This included The Grand Flush, where staff invited local people to simultaneously flush the arena’s toilets as part of the testing process. Hundreds of residents turned up and were given the very first public tour of the building as a reward.
It’s the third award the team has won since the arena opened last August, after winning Innovative Marketing at the HullBID Awards earlier this year and Best Digital Marketing Communication at the Hull Daily Mail Digital Awards.
Now in their fourth year, TheTicketingBusiness Awards (previously Ticketing Technology Awards) are the only awards to recognise a whole spectrum of achievements from across the global entertainment ticketing industry.
Dan Harris, general manager at the Bonus Arena, said: “We are delighted to be recognised for the hard work of all of the team during our first six months of opening. To be shortlisted alongside campaigns by Ed Sheeran and Amazon Prime is incredible, but to also win the award is fantastic.”
The awards ceremony took place during TheTicketingBusiness Forum, in front of an audience of senior industry figures.
“Congratulations to everyone who reached the podium,” said Ian Nuttall, founder of TheTicketingBusiness. “Winners included our industry’s leaders, achievers and stand-out innovators, who should all be very proud of their achievements.”
Hundreds of nominations were whittled down to create the shortlist, judged by an independent panel of industry figures including: