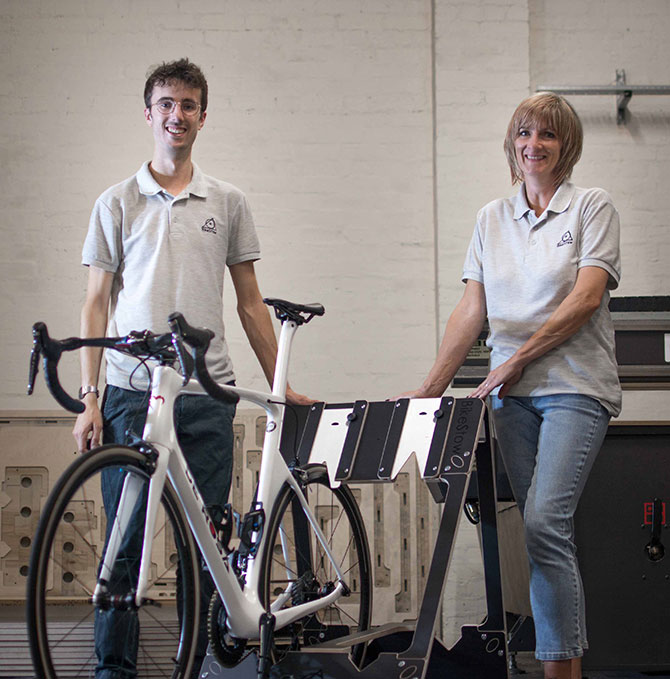 It started out purely as an enjoyable pastime and an attempt to make life easier for a family of enthusiastic cyclists – and now it’s a growing business attracting customers from Europe, the USA and Australia…..

Entrepreneurs come in all shapes and sizes, from the Bransons and the Sugars through to one man/woman bands  – and the Laight family from Edgbaston, Birmingham are determined to carve their very own special niche in the world of enterprise, thanks to BikeStow.

The Laights’ passion for cycling – shared by father Simon and sons George, Oscar and Billy and supported by mum Julie – has spawned an intriguing manufacturing start-up based on an industrial estate near Stourbridge which is already gaining significant interest from the cycling fraternity.

But BikeStow – as the family concern is called – would never have seen the light of day had the Laight family not been such keen cyclists anxious to keep their bikes in the best possible condition as they travelled the West Midlands looking for suitable cycling expeditions.

Mum Julie explained: “For years we were using a people carrier to ferry the bikes around – the boys were getting bigger and the bikes were not big enough. We bought a big six-seater Transit van but you would have to spend half an hour loading the bikes and putting towels in between to stop them from getting scratched. We had the space but not the means to stop them from damage. We wanted to drop the bikes in the van and just go.”

Son George, 21, added: “The van was half the problem solved. There was no way of holding the bikes securely or safely, we were trying to lean them up on their sides and stack them up with towels, or they would get damaged.”

But a solution to the two-wheeler conundrum – and the catalyst for a unique family start-up enterprise – was slowly taking shape in the mind of father Simon, a Birmingham solicitor who was just as committed to cycling as his three sons.

Julie said: “From 2015 Simon was thinking about a solution. He would go off on his weekends to B&Q to buy plywood to provide some way of holding the bikes in our van – it was a DIY thing that could help us move the bikes.

“That continued until 2018 – he spent hours and hours working on various prototypes. His dad is a patent agent and eventually we took the prototype covered up in the van so we could apply for a patent.

“That was over three years ago. We had all got fed up with him talking about it and spending hours in the garage and we suggested that he should take it to the Cycle Show at the NEC.”

Meanwhile son George’s eye and aptitude for engineering was to play a crucial role in the BikeStow story. As he recalls: “We had to turn it into something much more professional. I had decided to have a gap year, I had a place to study Industrial Design at Loughborough University.

“But I realized that I wanted to do engineering rather than industrial design, which is more art-focused. I took a year out and wanted to do something more engineering-based. I like problem-solving, and this opportunity came at the right time and the right place for me.

“That summer holiday coincided with getting involved with this. The others had gone on holiday and Dad and I stayed at home, working on it, developing it and working how to fold it flat.”

The Cycle Show at the NEC in 2018 was to prove a hugely significant milestone for the enterprise which would eventually become BikeStow. Julie said: “It was about taking the concept and trying to turn it into an actual product.

“We would never have got to the Cycle Show had George not got involved. It would have just ended up as something else which had been knocked up in a cycle shed. There was a lot of work involved, it was not just design, it was getting ready for the show, it was working late into the night.”

George recalls: “It was eight weeks of putting an awful lot of effort into the design. A lot of the time it was two steps forward, and one step back.”

Says Julie: “We took a little stand at the Show – all the big multi-national cycling companies were there, selling bikes and components. The idea was to gauge reaction, to see whether people wanted it, to see if it could be a business.

“The Cycle Show was the turning point. We had the stand with a few of our prototypes and we explained who we were, what we were doing. We put together a paper survey, and we later got emails back.”

George added: “We all went to the Show, other people and extended family came and helped and supported us and we realized that we were onto something. We had a prototype but no way of getting a method to make and sell them.”

But, highly encouraged by the response and feedback generated from the Cycle Show, the Laights were by now determined to turn BikeStow into a viable business.

George recalls: “We were working on the prototype for a further three months, developing it, setting up suppliers, setting up the website, working on the packaging. Before we had this unit, we had outsourced all the manufacturing process to a firm in Belbroughton. We didn’t own any equipment, as we didn’t know how far we would go. There was a long intermediate period of running it from home.”

Julie recalls the early days of BikeStow with considerable feeling: “You can only build a business from home for so long – that was up until 2020. For a year and a half, I was on the garage floor. It became a full-time job, I was left running it on my own, working putting BikeStows together. It was getting too much in the garage, it was exhausting manual handling – you either move on and invest in a unit, or you call it quits. That year and a half was really, really tough.”

George added: “Our job on the garage floor was to put all the panels together on our hands and knees. It was cold in winter.”

But after so much effort, personal time and investment the Laights were too far down the track by now to abandon the BikeStow bike rack project. Following on from the initial interest generated by the Bike Show, the family invention had caught the eye of influential cycling magazines.

Says Julie: “It was really scary to see what kind of reviews they gave us, but in the end we got five-star reviews. It was brilliant.” After years of effort – and considerable financial outlay – BikeStow was finally up and running in meaningful fashion.

The next crucial stage in the BikeStow saga coincided with lockdown, as mother and son recall. Says Julie: “It was still the tip of the iceberg. We had to decide whether to treat it as a hobby or start a business.”

George added: “We took the opportunity to move into this unit and invest in new equipment. We moved in here in June 2020 – it seemed like the next logical step, it was the right thing to do. We have invested quite a lot of money.”

The fledgling bike rack operation is already helping turn the wheels of West Midland industry, albeit on a small scale. Says George: “We have started assembling and shipping from here. Laser-cutting is still done by Midtherm Laser of Dudley, rubber felt is supplied and we work with a firm of metal polishers, MA Polishing Ltd of Birmingham. Everything else is done by us.”

Julie added: “The greatest thing about using local suppliers is that they are just a phone call away,” while George said: “They care, they are really good companies. We are trying to keep it as local as we can.”

It would seem that BikeStow has hit the ground running in enterprising fashion. Julie explained: “Sales are growing month on month with around 40 per exported, including to Australia, the US, Europe.

“More and more bike shops are coming to us and want our BikeStows for their displays. We love what we do but I do not want to lose that. If we were to start selling through distributors, we would quickly lose control of the product pricing – people value being able to pick up the phone and talk to us.

“It is not just about numbers – we have a close relationship with our customers – we have over 1,000 from all over the world. We are currently direct to the consumer only, it works for us. A lot of our customers have bikes which can cost £6,000 or £7,000. Because of lockdown the market has grown a lot.”

BikeStow is already in the throes of developing a second bike rack model designed for storage at home rather than the original transportation product. Says George: “The potential here is for other bike racks and bike accessories.”

Says Julie: “It is very exciting. We are now seeing returning customers, coming back for their second or third racks. We have even got an order going out to Russia. We already have a waiting list.”

Whilst it’s still early days for BikeStow it would seem that the original vision of father Simon for a user-friendly bike rack to help prevent damage in transit has been more than vindicated – with a profitable new family business and worldwide interest in its products.

Says George: “Dad knew all along that we could make a business out of it. I am now on my placement year and my plan is to come back and work here full-time if it goes well. It feels like a proper business now rather than a hobby.”

Although still in its infancy, the BikeStow vision has paid off so encouragingly that earnings are already being ploughed back into the business as Julie says. “We are running at a profit and that is nice, because we can reinvest. At present, we are not taking anything out of the business.

“ I love what we do, I love the concept behind it – we have some lovely customers.”