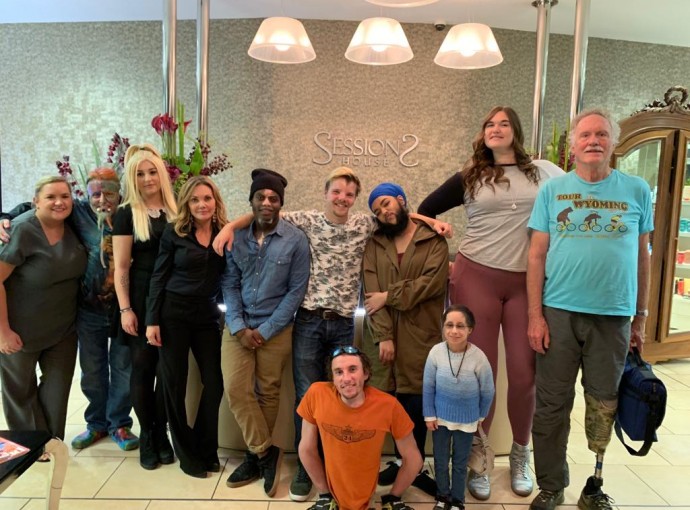 A Beverley-based hair and beauty spa will feature in a new Channel 5 reality series starting tonight, Monday March 18, at 10pm.
The House of Extraordinary People will air for three nights and follows nine people from around the world with unusual appearances, who want to show what it’s really like to stand out because they’re different.
The producers selected Sessions House as a filming location, as they identified it as the leading day spa in the area. They were impressed with the luxurious building and treatments on offer.
The residents of the House of Extraordinary People include a woman covered head-to-toe in benign tumours, a man with only an upper body, a man with vitiligo and a 6ft 10in woman. They all lived together for 10 days in a Yorkshire house to help confront the public’s prejudices and their own fears, such as going swimming and speed dating.
All nine people visited Sessions House, and enjoyed a variety of treatments including massages, professional makeup, manicures, pedicures, waxing and blow dries. While this was understandably a daunting experience for many members of the group, several said they had “never felt so special”, which was one of the reasons Sessions House wanted to take part in the series.

Georgina Parkinson, owner of Sessions House, said: “We were thrilled to take part in filming for The House of Extraordinary People. We pride ourselves on making all people feel welcome at Sessions House, so this was the perfect opportunity to demonstrate our understanding of the many needs and challenges our clients experience.
“For example, we’re currently in training for a new range of medically safe pre/post-cancer treatment services. With such a high percentage of the nation now affected in some way by cancer, this has become a high priority for our future treatment list.
“We want to do anything we can to help make people feel good about themselves, and we hope our involvement in the show empowers more people who feel self-conscious not to worry when visiting a spa or salon.”
As well as visiting Sessions House, residents from the House of Extraordinary People filmed at several other locations in Beverley including the Westwood restaurant and Beverley Leisure Centre. The scenes filmed at Sessions House are set to air in episode three, on Wednesday March 20, at 10pm.

The salon and treatment rooms at Sessions House are built within the fabric of a restored 18th-century courthouse located in Beverley’s ​New Walk​. It’s owned by award-winning hairstylist Jimi Parkinson and his wife, Georgina, who’ve both run salons for more than 30 years.
The 11,500 sq ft hair and beauty spa features a 28-seat salon, 11treatment rooms, a steam room and two calming relaxation rooms. Sessions House offers a variety of spa packages and has ample free parking for clients.