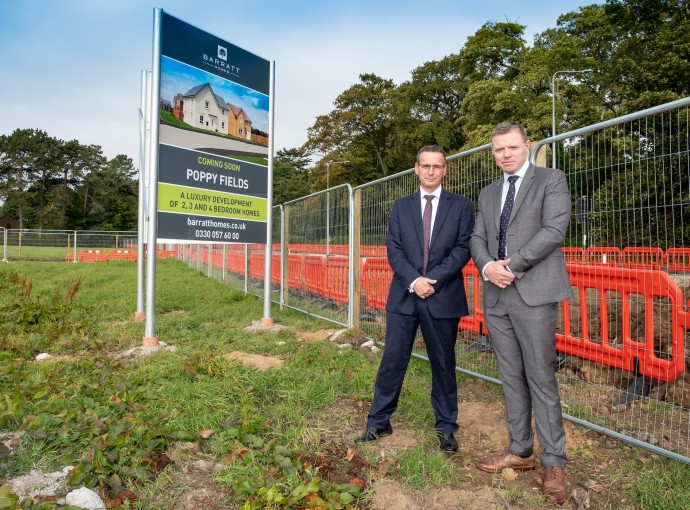 Barratt Developments, the UK’s largest housebuilder, has started on the construction of more than 300 homes after completing the acquisition of a major site in Cottingham, East Yorkshire.
The company was able to move quickly to begin access excavations on the 30-acre Poppy Fields project in Harland Way as a result of extensive preliminary work carried out by Lovel Developments, the Beverley-based business which specialises in bringing forward sites under multiple ownership.
Mike Roberts, Barratt Developments’ regional managing director, said Poppy Fields was one of a number of significant projects in the firm’s Yorkshire East region and properties would become available under the Barratt Homes and David Wilson Homes brands during 2019.
He said: “Housing is very high on the country’s agenda at present, which is why we strive to develop excellent working relationships with companies such as Lovel Developments, as well as driving forward our own site identification.
“Lovel’s expert knowledge ensured a smooth and seamless transfer of land ownership, with the team completing many of the complicated elements ahead of our acquisition. We’re looking forward to starting work on the new development in Cottingham, creating high quality properties for future homeowners to enjoy.”
Lovel Developments began its public consultation on the site in September 2014 and secured planning permission to build more than 300 homes ranging from four-bedroom detached houses to terraced homes, apartments and affordable housing. The plans also include public open space, play areas and flood alleviation facilities.
Philip Lovel, managing director of Lovel Developments, said: “As well as carrying out development ourselves, an important part of our business is delivering land for large scale development for other builders.
“We took this site from bare land, got it allocated in the local plan and secured planning permission. We also dealt with all the issues around flood risk, ecological matters and highways. We did everything up to putting a spade in the ground, and that makes things easier for the house builders.
“It has been a complicated process because initially the land was under the ownership of four different parties, but we are used to that. We are good at unlocking and bringing forward large-scale, good-quality sites.”
Lovel Developments has worked with Barratt David Wilson Homes on previous projects, notably the Aspect development in Anlaby. The company also works with other major builders.
Mr Lovel said: “This is one of the prime sites in the region because Cottingham is a desirable area with good schools, good transport links and a busy village centre which is not far from the houses which will be built here. Barratt Homes will do a great job at Poppy Fields and we’ll be turning our attention to some of our other exciting projects at a number of sites.”