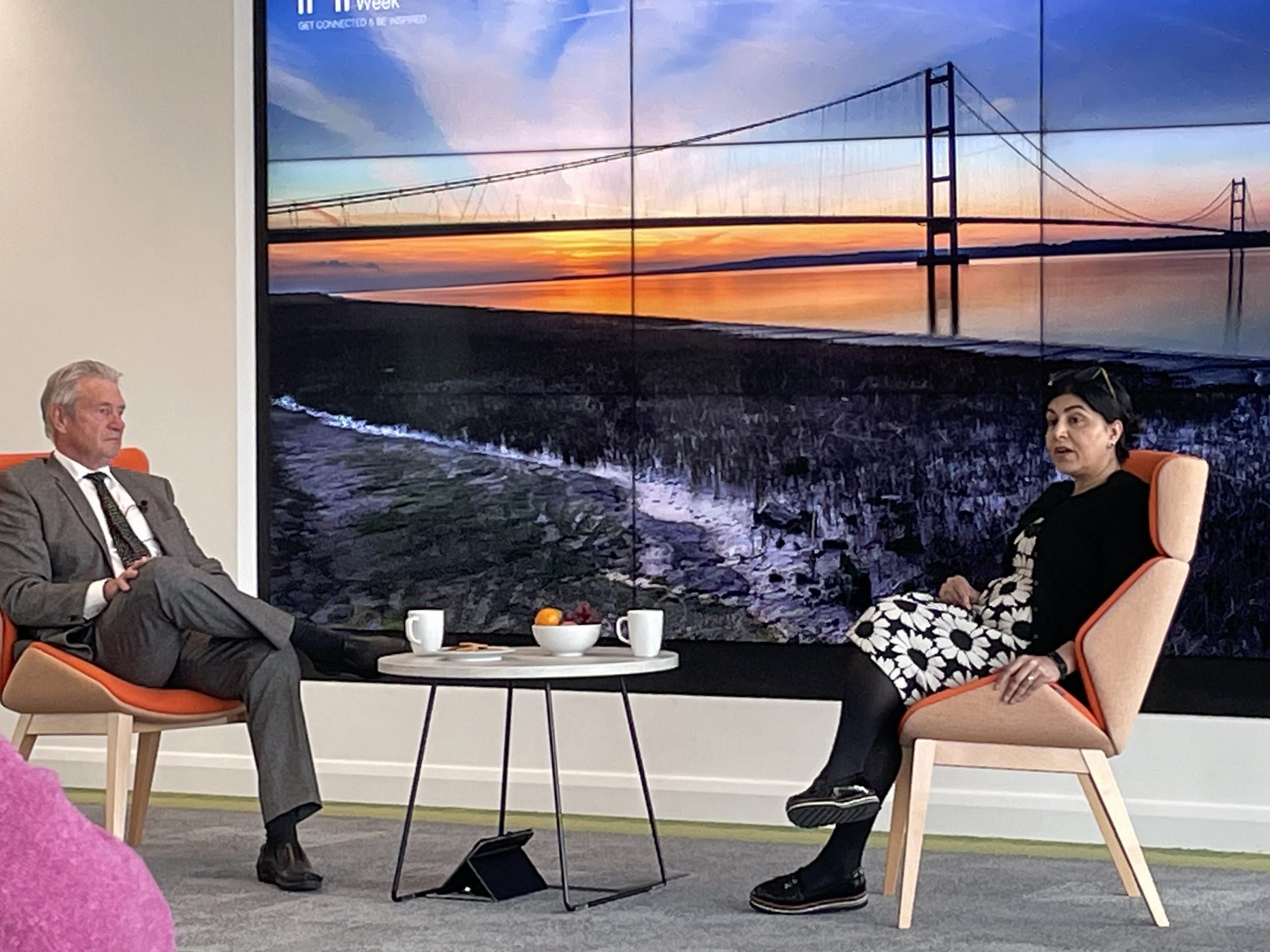 The first Muslim to serve in a British Cabinet told of her concerns about extremism at the Batley and Spen by-election and about discrimination in both Houses of Parliament when she spoke at Humber Business Week.

Baroness Sayeeda Warsi also underlined the importance of delivering on the commitment to levelling up in a meaningful way and of providing practical support for business.

Interviewed by Paul Sewell, founder of Humber Business Week and chairman of Sewell Group, at the Aura Innovation Centre, Baroness Warsi told how her father arrived at Heathrow Airport in 1962 with £2 in his pocket, got a coach to Batley and started working double shifts at the mill.

She said: “He came from an utterly poor family where when it rained part of the house used to fall down. If you come from nothing you have no option but to start fighting from day one and say it can never be as bad as it was so, hey, let’s take a punt. In parts of my life something has come along and I’ve just made a cheeky offer.”

One such punt came when she secured a 50 per cent stake in the legal partnership which she was invited to join while working for the Crown Prosecution Service. She also became involved in the family business set up by her father after he had worked as a bus conductor, a bus driver, a driving instructor and in a bread factory.

“It was manufacturing beds and mattresses. We had some great marketing – ‘In Yorkshire we’re so tight we squeak but thankfully our mattresses don’t’.”

But she also built a political career which saw her elevated to the House of Lords in 2007 at the age of just 36, making her the youngest peer in Parliament at around half the average age of some of her colleagues.

In 2010 she was appointed by David Cameron as minister without portfolio. Images of her wearing traditional dress outside 10 Downing Street were beamed around the world. She became chairman of the Conservative Party, senior minister of state at the Foreign and Commonwealth Office and minister for faith and communities.

But discrimination was never far away. She hit the headlines when she confronted British National Party leader Nick Griffin on BBC Question Time and she is on record for standing up to discriminatory comments in Cabinet and the House of Lords, taking one incident as the inspiration for her 2017 book The Enemy Within: A Tale of Muslim Britain.

The title came from Baroness Warsi sitting in the Cabinet in her late 30s and a right-wing commentator referring to her as the enemy at the table: “It was an insult that hurt but it made for a great title for the book.”

In the Lords there were attempts to dismiss her from the outset: “What created the biggest fuss was that I arrived straight on the front bench and I could hear people chuntering on my own benches behind me – upstart, who does she think she is?

“I think my being there made other people feel uncomfortable because you are upsetting the status quo. I went in having had a legal career and a finance career and set up a charity and suddenly there were all these people thinking I had to prove myself again.

“The Lords has to change. You can’t have a chamber of 800 people, most of them past their best. At 36 I was given the job and have now got it for life? How does that work? I could completely go off the rails but I could still go there?

“It’s still a rich man’s club. How do you expect people in their 30s to do that properly when they have a family to bring up and a mortgage to pay? It should be smaller with fixed terms. It should be a professionalised role. Reform isn’t working because it requires people to effectively retire.”

Baroness Warsi also questioned the definition of “levelling up” and said housing is the key to giving people options.

She said: “It’s a new phrase but what is it? It’s a great political strapline but the single biggest issue about levelling up is housing. A home is something that each and every one of us needs.

“When we were growing up a council house was a point of last resort and the prospect of buying your own house was real. The minute I owned my own home I suddenly felt that I had a stake in the society around me.”

The Baroness said her forthright approach to politics and business came from growing up as one of five daughters, learning “how to fight and how to be heard”.

She said: “We were born in a society and a culture where boys were seen as the preferred child. We were born on the wrong side of the balance sheet. Men were seen as assets. Right from day one you are fighting to say it matters.”

She told of her hope in the 1990s that society was becoming more diverse, and her fear now that it is going backwards: “In the 90s I genuinely felt as a British Asian it was a coming of age, yuppified, foreign holidays, real products of social mobility.

“I thought the bad days of racism had gone and we were in a much better place but in the last few years it’s been quite uncomfortable. That whole campaign around Brexit – I went to London the day after the vote and there was an icy chill that I had never felt before.”

Focusing on the forthcoming Batley and Spen by-election, the Baroness said: “Here are the polar extremes once again finding themselves in this constituency where we lost Jo Cox to the hands of extremism.

“It’s disgusting that where we lost an MP here we have people with such extreme views wanting to represent the constituency.”

She also highlighted the current failings of all the main political parties.

She said: “There are a lot of people who don’t feel comfortable with any of the political parties. I am ultimately Conservative. I don’t agree with some of the stuff my party does but I am not prepared to leave them to it because internal opposition is important, especially when the external opposition is so rubbish and not doing its job.

“In the 2010 cabinet I sat alongside Ken Clark, Dominic Grieve, David Willetts, Justine Greening and now it’s changed. It’s a very different kind of cabinet. We have to make sure that within the party there is democracy and rule of law, values, basic principles of the way in which this country is run, a free press, a free judiciary.

“When I see my colleagues attacking those very basic things it really worries me. We are custodians of this country and its values and that has to be for the long term and very, very easily as we saw in the US a country could slip into really crazy anarchy behaviour and we have just got to make sure we don’t allow that to happen.”

But Baroness Warsi said that effective support from government for education and business can deliver a bright future.

She said: “The potential for us now is huge. The way in which we can think about what the world will look like in the next 10 years is going to change so drastically. Circumstances have forced us to change the way in which we do business. Anybody can run a business anywhere. The opportunities are there and it’s whether or not our mindset, our education and the support we get from government can work together in a practical way.”

Now 50, the Baroness told how she decided to mark the milestone by accepting an invitation to take part in the Stand up to Cancer challenge, training in stand-up comedy and winning the final.

She said: “I have learned to not care much about what people think. I am much more inclined to take risks. The last year has taught me that life is quite short and at 50 I have probably done more than half my life already so I am constantly pushing myself out of my comfort zone – and I am now officially funny.”