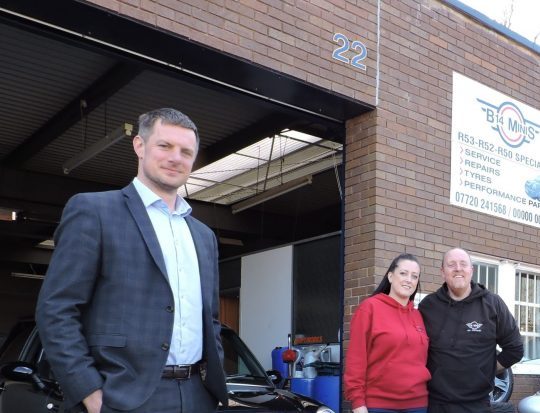 Fledgling specialist auto engineering firm B14 Minis is in pole position for the future after commercial property agents John Truslove helped the business find its first set of premises in Redditch.

Mechanic Chris Benham has two decades’ experience working on BMW’s Minis – since the brand was relaunched – and has built an enviable reputation with Mini enthusiasts across the region for his work maintaining and upgrading their cars.

Chris and partner Katie Gammon had run the business from home and by sharing a mechanic friend’s premises and renting space on his ramp.

However, a surge in work since the Covid-19 lockdown accelerated plans to find their own premises.

And that is where Ben Truslove, joint managing director of John Truslove, stepped up.

Chris Benham said: “We had known Ben for a while – he’s a motoring enthusiast too and helped our friend find his premises – so it was only natural to turn to him for help.

“He and the team at John Truslove have been brilliant and made the whole process really easy. They acted for the landlord but it felt like they were working for our benefit too, and our new premises is absolutely ideal.”

B14 Minis has taken a long-term lease on a unit at 22 Colemeadow Road, on the North Moons Moat industrial estate in Redditch.

Chris Benham said: “I’ve loved the Minis since BMW relaunched them, when I was working for a BMW dealership.

“I drive one myself and a lot of my customers are enthusiasts; their Minis are second cars for the weekends or track days. Over the last year we have seen demand for maintenance and servicing work overtaken by people wanting upgrades to their suspension, braking systems, engine tuning and so on.

“It became clear we needed to have our own workshop to cater for the demand, which has just kept growing.

“We have the next three weeks booked solid. We are already well known among the Mini-owning community through events and social media but once we are through the pandemic, we aim to run a few open days here for people to come along, have a coffee and talk Minis.

“We were very keen that our premises should be over this side of Birmingham, as we live nearby. Ben and the team at John Truslove have helped us find the right premises to get started and I’m sure there will be further conversations in the future as we grow.”

Ben Truslove, joint managing director at John Truslove, said: “We have a great relationship with Chris and Katie at B14 Minis and they were very clear about the kind of premises they needed. We take particular pride in our unrivalled knowledge of the local property market so we knew at once when this workshop became available and that it would suit Chris down the ground.

“It means our landlord client, Mileway Real Estates, had a new tenant very quickly and we are looking forward to a long and fruitful relationship with B14 Minis into the future.”