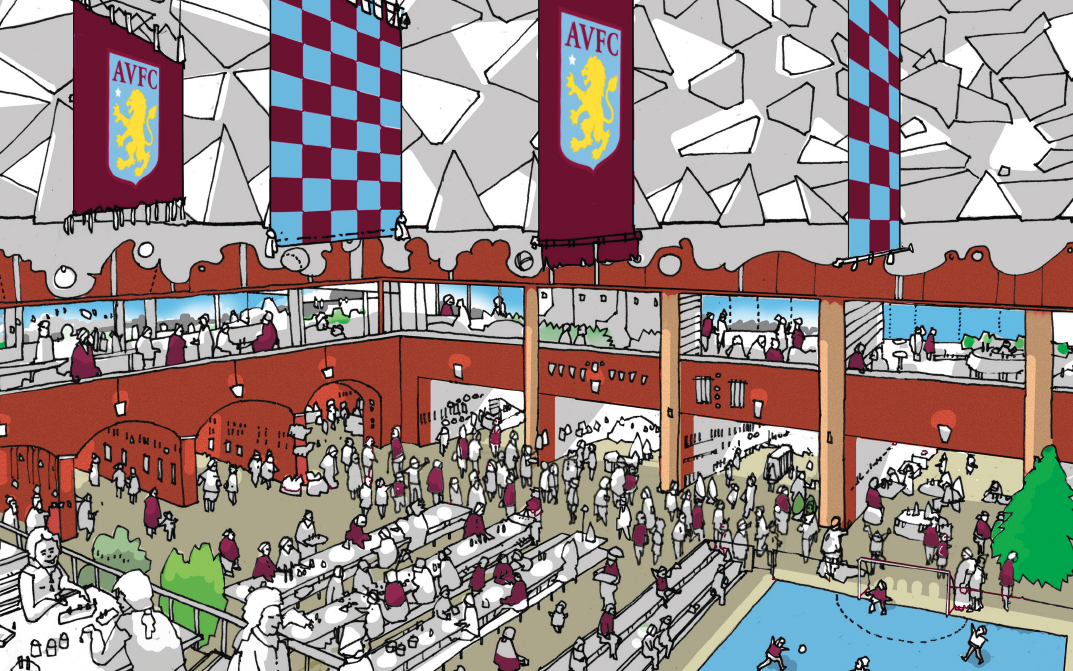 Aston Villa Football Club has launched a pre-application planning consultation on the first phase of its long-term vision for Villa Park and the surrounding area.

The plans will pave the way to create a world-class sporting venue, enabling the club to compete at the very highest level. The ambitious plans also set out the club’s commitment to the local community, creating a destination that can be enjoyed all-year round.

The first phase of the plans includes a brand-new North Stand connecting into Trinity Stand, and enhancements to the existing Trinity Stand which will see capacity for the stadium increase to more than 50,000. The development will also see significant improvements to fan experience through an upgraded food and beverage offering, enhanced hospitality packages, improved connectivity and more.

The plans will also see the introduction of Villa Live, a brand-new commercial destination venue and community space. Villa Live will be a multi-purpose central ‘hub’ space, including the club shop, food and drink outlets and areas dedicated to showing the club’s rich heritage and history. Aston Villa is asking the local community to help shape the story for Villa Live, from a calming space for new parents, an active area for dance classes to an event space for training and education, the aim is to create a thriving and active community unique to Villa Park.

The space around the new North Stand and along Witton Lane will also be transformed, creating a dynamic public space which can be enjoyed by all. The improvements will include better connections through Villa Park (connecting Aston Park and the Trinity Road entrance), enhanced street lighting and wayfinding, and the introduction of places to sit and socialise through new landscaping. The first phase of improvements to Villa Park are estimated to take place from 2023 through to 2025.

Running from June 28, 2022, for a four-week period, the pre-planning application consultation comprises a survey and a series of community drop-in sessions to capture the views of local residents and businesses. The consultation is a core part of the planning process, and the results will be used to inform design development and the planning application, which the club will submit later this summer.

The redevelopment of Villa Park forms part of a wider vision to transform the local area, with the ambition to deliver significant social, economic and environmental benefits for the community.

Christian Purslow, CEO of Aston Villa, said: “We are excited to share our vision for Villa Park to become a world-class sporting venue and thriving community destination. It is important that we gain the feedback of our local community, fans, and organisations, as we want them to play a key role in shaping the next chapter in Villa Park’s illustrious history.

“The redevelopment of the stadium is vital to the club to satisfy growing demand. By elevating the hospitality offering at Villa Park, we want to enhance the matchday experience and create a year-round entertainment venue to benefit both the community and our fans.

“The plans reveal our phased approach to redevelopment, considering each stand individually and identifying the necessary upgrades to minimise disruption to the community.

“We believe that our proposals for Villa Park will have a transformational effect on the local community and wider area, and we are working closely with Birmingham City Council, the West Midlands Combined Authority and other key stakeholders to ensure our design proposals align with Birmingham’s ‘Big City Plan’ for 2040. We want to put Aston Villa and Birmingham on the world stage and hope the redevelopment will support our ambition to host future UEFA matches – especially if the country is successful with a bid for the Euros in 2028.”

The club is engaged in discussions with all the relevant authorities regarding making strategic improvements to the transport infrastructure around the stadium which would be necessary to facilitate a redeveloped Villa Park.