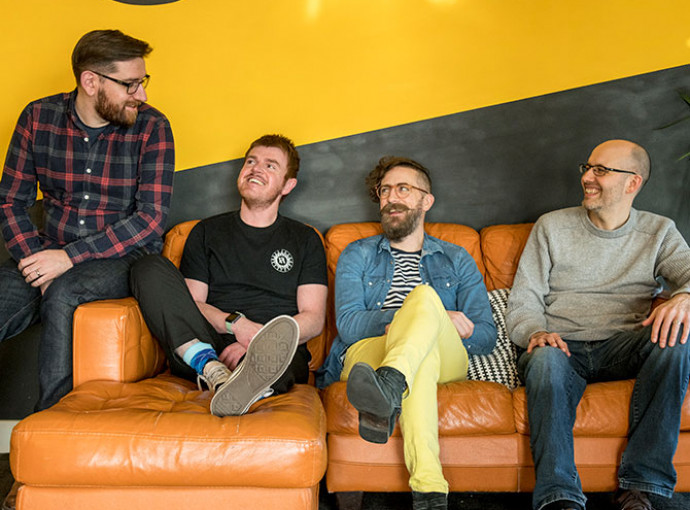 Many years ago, well before the internet, our visions of “the future” probably revolved around flying cars and hoverboards. We might not be quite there yet, but if there was ever a company of the future, Sauce – Hull’s fast-growing “internet of things” and mobile app development agency – is it.

Founded by Matt Gibson, John Polling and Jim Wardlaw in 2016, with Matt Weldon joining soon after, the company – based at C4DI, in Hull’s Fruit Market area – now has 30 staff, a £1m-plus turnover, and has been garlanded with numerous awards both local and national, a fact that’s promoted front and centre of its hugely impressive website.

Talking to the two Matts, I somewhat gushily tell them that their online “shop window” is among the best I’ve ever seen. The Sauce website really is excellent, and it perfectly reflects a vibrant company bursting with ambition and personality, from the quirky team pictures (showing each member wielding their favourite bottle of sauce, humorously illustrating the “sauce/source code” pun), to the more basic – but essential – stuff such as in-depth and refreshingly error-free content, as well as clean and accessible design.

It was the emerging tech community at C4DI that brought the four of them together. “I was working at the tech hub at the time, looking for something to really get my teeth into,” says Gibson, “and Jim and John were working in there as mobile app development freelances. We could see an opportunity in the investment that was taking place in C4DI, in the work that John and Jim were doing. Our skill sets worked well together, and when Matt joined us, he fitted in perfectly.”

At one time, Hull businesses looking for help with digital development would have looked further afield to Leeds, Manchester and London, but the city’s home-grown tech industry was beginning to find its feet, explains Weldon. “In 2016, the tech industry in Hull was just ramping up. There were more and more businesses within the city looking much closer to home to provide what we do, which is basically working with them to help them innovate.”

In the early days, they relied on word of mouth to build their reputation, and the supportive tech community at C4Di was a crucial part of Sauce’s rapid growth. They were surrounded by a network of like-minded people – from fellow techies to experienced business leaders, many of whom were happy to dispense their time, advice and knowledge. One of Sauce’s neighbours at C4DI is Meehan Media, run by former editor and PR consultant John Meehan. Getting John on board to help promote their brand has also proved to be an invaluable investment, says Gibson.

“Accessing the support that any business would need early on – in terms of getting your first clients, and your first bit of money – is that much easier when you're in a community of people who are in a similar industry,” Gibson adds. “People are willing to help out, and one of the big advantages of being here at C4DI was that there's a lot of very successful businesspeople to offer you support and guidance. That's been a big help. People don't have to give their time, but in Hull there’s genuinely a support network.” 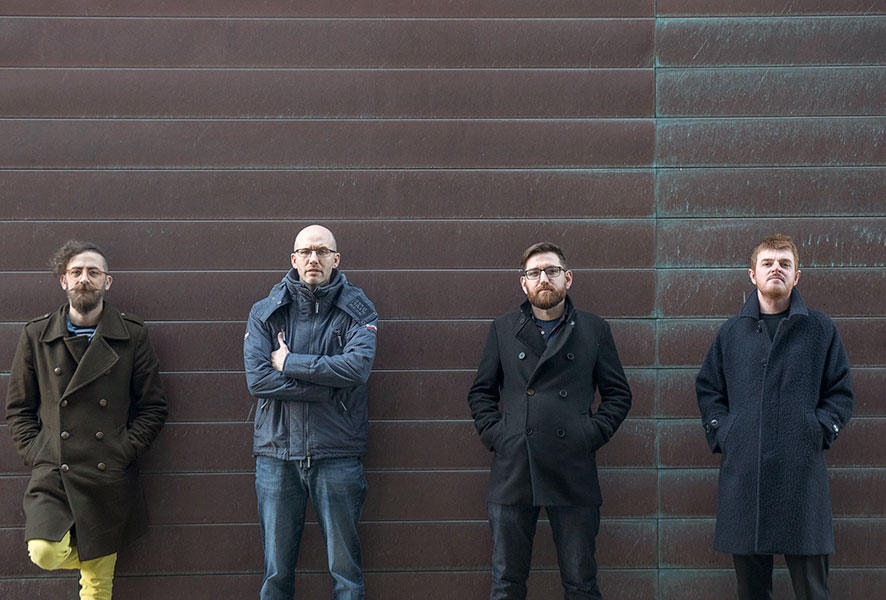 “As someone who wasn't born and raised in Hull,” adds Weldon, “I’ve seen that there’s this huge sense of pride in the city… just this sense that people want to see Hull put on the map in that respect.”

“The first year or two,” says Weldon, “we were kind of proving ourselves, and then when we began to garner some good case studies, larger organisations in the region and further afield were looking at those and thinking, actually, we know we need to take our business to that next level using internet of things (IoT) technologies.

“It’s just been about proving that, as a smaller organisation, we could come into a business and help them stay ahead of the curve – and as the years have progressed, we’ve looked to scale that, and take that start-up mentality into to these larger organisations. What we’re constantly hearing from them is that they need to do this work, and while there are loads of companies out there looking to jump in and do it for them, we can work alongside them as the delivery partners in innovation.”

So just what exactly is this work? If you’re not in the tech industry, some of the terminology, such as “CRM, ERP and EAM solutions”, “front-end UX” and “cloud-based middleware” probably does sound a bit like flying cars. But the truth is most of us are already using this kind of stuff in our own homes – if you don’t have a smartphone or the internet, you’re in a dwindling minority, and millions of us possess a “smart” device of some sort, from Alexa-type home assistants to thermostats such as Hive and connected security/CCTV systems. Businesses that don’t invest in this kind of technology are, quite simply, at risk of being beaten by the sizeable and growing competition, even if they are not in the digital industry.

A great example of this is Hull’s Ideal Boilers, one of the country’s leading boiler manufacturers, whose origins date back to 1906 – a traditional business now facing competition from a host of rival smart thermostat firms. Ideal commissioned Sauce to develop the user-friendly, cross-platform Ideal Touch Connect app, which, among its many features, allows customers to integrate it with the Amazon Echo and access remote customer service support. With the help of Sauce, Ideal Boilers went from being at risk of lagging behind the big players to having the unique advantage of being able to offer a one-stop solution for the entire home heating system.

“The whole world is becoming digital,” says Weldon. “I recently read a statistic that said that in 2017, 13% of businesses had heard of IoT and were thinking about putting a project together; by the end of this year, this has gone up to about 60% of most enterprises having some form of IoT. That shift is huge. Every industry in the world will ultimately end up being disrupted, and really it’s about working alongside a client to look at how they may stay at the forefront. I think that embracing digital and IoT, and using data to drive your business, is non-negotiable nowadays.”

The more we rely on technology and smart software in our daily lives, the more we come to expect it in our working lives, too, and Sauce has helped numerous firms develop staffing and shift organisation software. Its bespoke MyTime app, developed for Siemens Gamesa to help the Hull factory manage its complex working patterns and HR needs, won the gong for best mobile app at the Hull Digital Awards in 2017. In the same way as the likes of Amazon have transformed people’s expectations around delivery speed and service, “people don't want to interact with software at work any differently from how they interact with software in their personal lives,” says Weldon. “And by 2021, research shows 40% of people in business will expect to interact with work applications in the same way as they interact with apps like Facebook.” 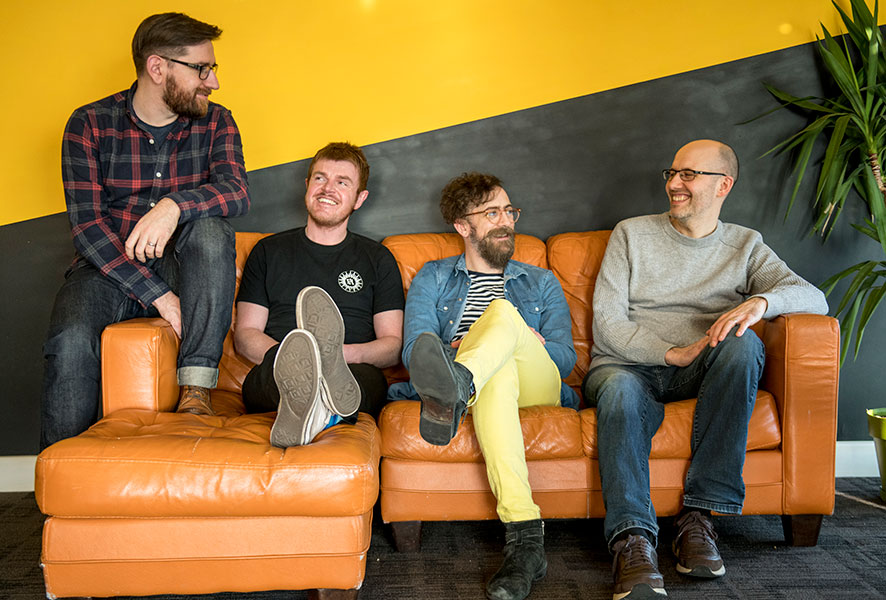 A concern with anything that relies on the internet is its vulnerability to cybercriminals, which is why Sauce ensures it adheres to the same exacting standards as those expected of the businesses they work with. They have in-house data protection and GDPR experts, and are currently working towards ISO/IEC 27001 certification for the business as a whole. “Over the past 18 months,” says Weldon, “we've been looking more and more at that side of the business. Everybody here knows how powerful – and how precious – data is, and while we know we’re doing the right thing, we are also proving we’re doing the right thing by ensuring we have the right kind of industry standards in place.”

While Sauce is still a relatively young company, they’ve had to increase their C4DI office space five times in the past four years (and are set for another move in the coming months, becoming an anchor tenant of the C4DI expansion currently under construction), and their long list of clients includes major blue-chip firms across all industries from finance to retail and healthcare – which should be enough to shake off any lingering “start-up” impressions.

Sauce is also among a growing clutch of Hull firms adopting a more forward-thinking approach to flexible working practices and staff well-being. The blog section on its website includes a series of interesting employee perspectives, including that of summer intern Rebecca Wardell, who writes, “Yes, the rumours are true… there is a beer fridge in the office. Beer O’Clock on a Friday is a fab way to start the weekend and socialise with the team.” Meanwhile, junior software developer Tomasz Kopec says his managers were keen to ensure he was comfortable at work. “Not many people believe me when I tell them I wear my trackies and a T-shirt while putting my bare feet up on the office sofa,” he said.

“We’ve hired very good people,” says Gibson, “and we've been lucky to find the right people at the right time. We’ve got some very good experience, and we think about ourselves as a team constantly. There are no egos in the business. There's nobody who is ‘the boss’ – collectively, we want Sauce to be successful. And those who have joined us are of a similar mindset.”

In recent months, Sauce was named by Business Insider magazine as one of Yorkshire’s 50 most exciting companies, and it’s not hard to see why. This is a young, cool and friendly company that’s only heading in one direction – up. However, looking again at the “Meet the Team” section on the website, I do have one small criticism. While I award full marks to Jack Longthorp, who lists his favourite sauce as “gravy”… where on earth is the Henderson’s Relish?