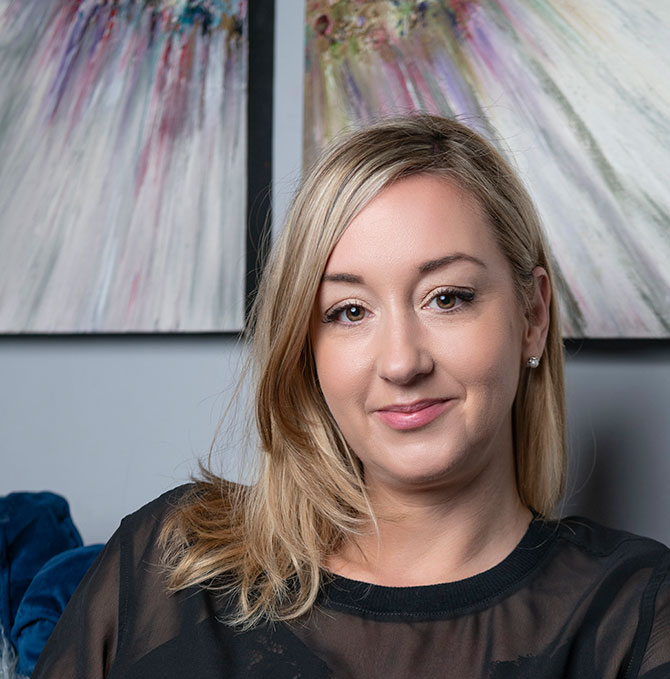 There are thousands of artists up and down the country selling their work in markets and local cafes and pubs, but few manage to turn their passion into a business.

However, Emma Bateman left a well-paid job in business development to do just that and, a year down the line, her hard work and creativity – both on and off the canvas – is paying off.

Emma spent much of her childhood in Greece, having moved there at the age of three due to her parents’ jobs. She acknowledges that she had “quite a different upbringing” – and not many people can say they sat next to Demis Roussos’s son on the school bus.

Art had always been her favourite subject, but, as was often the way, her parents – who moved back to a pig farm in East Yorkshire when she was 10 – weren’t enamoured by the idea of Emma pursuing a career in it. Despite this, she went to art college and took a foundation course as well as a GNVQ Advanced in art and design.

But at 18, the need to find regular paid work was more pressing. Emma spotted an ad in the Goole Times for a job as a sub-editor at the Press Association in Howden (now PA Media), went for an interview and got the position.

She soon transferred to London, and art was one of the last things on her mind at this point, as she made new friends and had fun in the capital as the youngest person in PA’s Victoria office.

Emma decided to move back to East Yorkshire when she was 21, and bought a house – which, around the turn of the new millennium, was far easier to do for young professionals than it is now, of course.

“I became a homeowner, and that was very exciting, but I had very little money because I was single and not on a huge wage, so I couldn’t really afford to brighten up my walls. So I thought I’d start having a go myself at painting some canvases – and that’s when I picked up my creative side again. I put some of my inspiration down to when I was in Greece. I was fascinated by the colourful and exotic butterflies and spent hours drawing them.”

Although Emma’s art was still very much a hobby at this point, her talent was becoming noticed by friends and family. She did a few freebies and cheap commissions, before her friend Sarah Colclough, the original owner of the Blue Sky gift shop in Howden, invited her to sell some paintings there.

Emma needed a bit of convincing, but she gave it a go – and was hugely encouraged when they sold. Sarah then rang around some galleries in York and landed Emma a meeting with Artfulness. “I would never have done that myself,” said Emma. “I didn’t think my stuff was good enough back then, if I’m honest – but I went to see them and they agreed to sell my work.”

Emma became part of a close-knit art community in the city and she’d sell a few paintings every month but, as it often does, life and work got in the way, and art once again became something she’d “pick up and drop” as and when she could.

But when she had her son, Charlie, and later split up from his father after a 10-year relationship, she realised that art would become a huge comfort.

“I was in a difficult and lonely place, and I used to turn to painting when my son was in bed. It stopped me from overthinking and it allowed me to escape from my thoughts and the pressures of life for a few hours. That’s when I started thinking, it’s not just a hobby – it’s something I need. It’s part of me, and I can’t just keep tossing it to one side. But the reason I did was I was frightened – I was alone with a mortgage and all these bills to pay.”

Emma had already handed in her notice at PA to take up a sales role at eBuyer when a chance chat with someone in sales in PA’s London office changed the trajectory of her career.

“I thought, hang on a minute – I’d rather stay at PA and do sales for them. I’d not really thought it was an option, but I found out her boss’s name, Kate Fairhurst, and sent her an email – I had nothing to lose. I asked her if she’d thought about having a northern business development manager, and she wrote and back and said, no, I haven’t – but why not? I think she liked the fact I was proactive and suggested the role, and I could make them money in the north, where there wasn’t as much demand, but there was still a big market.”

Emma was put on a three-month trial – and she went on to stay for the next decade, selling PA’s wide range of media services across the North, from Birmingham to Scotland, meeting big-ticket clients including Virgin and Tesco Bank.

By 2017, Kate Fairhurst, the woman who’d given Emma her initial break in sales, had become an entrepreneur and set up her own business, GrowthMinds. Emma, having reached the point where she felt ready for another change, contacted Kate to ask if she had any jobs going, and a few months later joined as northern business development manager.

Working for a start-up gave Emma the grounding and experience she needed when Covid struck in 2020 and the “light bulb moment” finally came.

She asked to be furloughed because she had to homeschool her children (by now she’d had a daughter with her husband, who worked for the NHS). “I found I had more time on my hands. Obviously the pandemic made a lot of people stop taking life for granted, but we also had a death in the family – my cousin, who had ovarian cancer, and was only 29. I just thought to myself, it’s now or never. I knew I had the sales and marketing experience – how would I turn this from a dream into a business? I had a lot of sleepless nights, writing ideas down at 2am.”

She began with greetings cards, which could be bought in bulk relatively cheap, and followed a similar formula to one she’d used at GrowthMinds, creating a database of stockists she wanted to work with – including the Yorkshire Sculpture Park and various local shops. “I would say about 75% of them came back and said they wanted to stock my cards, which was a bit of a shock,” says Emma.

Then came an out-of-the-blue commission from someone who’d seen Emma’s Facebook posts – a woman living in a large property in Pocklington who was looking for about 20-30 paintings. It was a huge, lucrative project that Emma simply wouldn’t have had time to do if she had been working full time, and it gave her the impetus to go fully self-employed in April 2021.

She knew the key to success was diversifying, and she began to invest in a larger range of products including mugs and tea towels – but another strand to her business came about rather by accident.

The head teacher at Howden School had bought one of Emma’s cards in a shop in the town, and contacted her asking if she’d like to do some art workshops with the children. It went so well that the teacher booked Emma for a private session for her daughter’s birthday; word spread, and she’s been booked up every week for the past nine months.

This has expanded into private painting parties for adults, which arose out of a collaboration with one of Emma’s stockists, the Jug and Bottle in Bubwith, whose owner Louise became something of a mentor. And now, most Friday nights, Emma runs parties where she brings the paint and equipment, while the host provides the refreshments and gets a cut of any products Emma sells on the night. She also uses social media to its full advantage, running regular raffles of her original artwork.

She’s learned a lot in her first year, from how to be more organised and understanding the vagaries of VAT, to not under-selling herself and learning to say no once in a while. “I’ve got more confident in my ability, but not just that – I’ve realised one of the most valuable things I’ve got is time.”

Emma is not sure at this stage whether she’ll take anybody on as the business grows – she is still very much the face, and product, of her business. “There are a lot of ifs and buts, and I’m still learning about what’s generating the most money and what I enjoy most. My focus is going to be on expanding the product range and working on the packaging. I could do with working with somebody who’s got experience in product design and retail buying. If I was going to work with anybody, that would be my next step.”

In autumn 2021, Burton Constable Hall hosted her solo exhibition, God’s Own Country, and even greater recognition came the following February when she took home the award for Innovative Business of the Year at the Goole and Howdenshire Business Excellence Awards.

“I was also nominated for the marketing excellence category, which I didn’t win – but the innovative business award was the one I really wanted. Harry Gration presented me with the award, which was for turning a passion and love of art into a business. I’ve done really well in my first year, just doing the art business, and nothing else. It’s not what I was earning before – but now I’m doing what I love.”

Next up for Emma is working as a teacher on an art therapy project with the Mires Beck Nursery charity, offering “green social prescribing” to adults suffering from stress, anxiety or depression.

And this is where it comes full-circle for her. “When my relationship broke down, leading to financial pressures, my mental health started to suffer a result; art provided an outlet for my emotions and kept my mind busy. It was a complete escape. So I want to be able to try to help other people who are suffering.

“I’m really proud of what I’ve achieved in the past year – and this is a great chance to give something back to the community.”