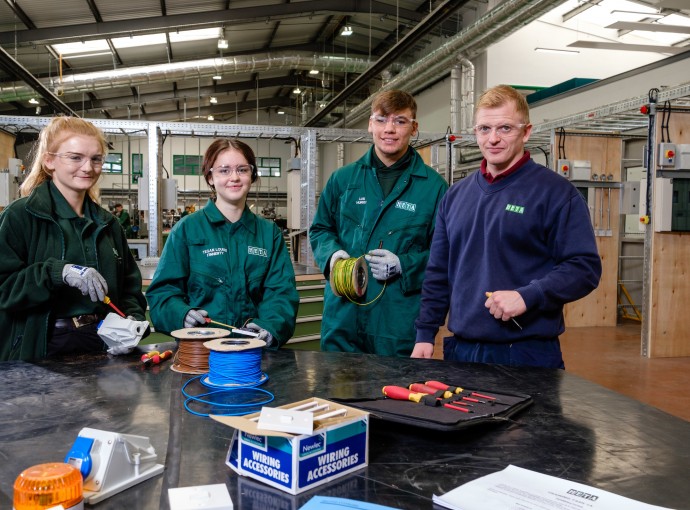 A new £4.5 million training centre opened its doors to apprentice engineers from across the region and earned accolades from the young learners and from the instructors.
The teenagers who have stepped up from schools and colleges to join Humberside Engineering Training Association (HETA) told how they were attracted to engineering by friends and family who have progressed into successful careers.
Their tutors welcomed the modern facilities, spacious surroundings and cleaner working environment.
Chris Sims, a mechanical instructor at HETA for nine years, said: “It’s a better, cleaner environment. All the equipment is in the right place and that makes life a lot easier. We’ve got more space, newer equipment and that’s good for the learners and the instructors.”
HETA has relocated its entire Hull operation into the Advanced Engineering Training Centre on Dansom Lane, Hull. The company has been supported in the move by Hull City Council’s Economic Regeneration team and by the Humber Local Enterprise Partnership (LEP), which secured £1.3-million from the Local Growth Fund through the Northern Powerhouse.
In partnership with its other sites at Foxhills in Scunthorpe and at CATCH in Stallingborough, Dansom Lane is extending HETA’s reach to meet the needs of aspiring engineers and employers from the traditional catchment area of Yorkshire and Humber into other areas of the north and midlands.
Each of the 171 new arrivals at the three sites completed a four-day team-building outward bound course near Skipton before donning their HETA overalls for the first time. They have now embarked on eight months of multi-skills training and will focus on their specialist skills after Easter.
Tegan Finnerty, 16, from Hull, was encouraged to go into engineering by her cousin. She said: “She came to HETA and is 21 now. It’s not what girls really go for but I have always been involved in more practical things and talking to her about engineering it sounded interesting. My year 10 work experience was in a hair salon but I knew from the first day I didn’t want to do that.”
Apprentice Jay Malone and instructor Chris Sim
Amy Conroy, 16, followed in the footsteps of her brother, Jack, who attended HETA four years ago, and travels from Bridlington every day with her mum, who works in Hull. Amy said: “I want to be a commissioning and testing engineer and maybe work for someone like Siemens and this is the ideal place to learn. I visited the previous site and this is much bigger and more modern.”
Liam Murrey, 18, was inspired by two cousins who went into engineering and he arrived at HETA after completing the sixth form at Withernsea High School. He said: “I want to make sure I get all of the tasks done and I am up to speed with the standards. I just want to try and progress as far as I can.”
Jay Malone, 16, from Howden, also has family members working in industry. He said: “I’ve grown up with engineering and I decided HETA was the best place to do an apprenticeship. There are more opportunities here for hands-on learning.”
About half of the first-year apprentices have already secured sponsorship from employers and HETA’s staff are working flat out to find places for the rest. The company has an employment success rate of 97 per cent, and every apprentice from 2017–2018 has found a job. HETA will hold an open day for employers at the new centre next month.
Iain Elliott, chief executive of HETA, said: “It’s always exciting to welcome the new cohort and it is really encouraging that so many of this year’s learners have been inspired by family and friends who came to HETA. It tells us that these young people can be our future ambassadors and it makes it even more important that we look after them and train them to the highest possible standards.
“It’s taken a long time and a major investment to get where we are and we still have more people to come because we are moving our Higher Education learners here from space which we used at the University of Hull. It’s great that we are finally up and running with a high-quality working environment and state-of-the-art equipment which will help us dispel the unfavourable perceptions which some have of engineering.”