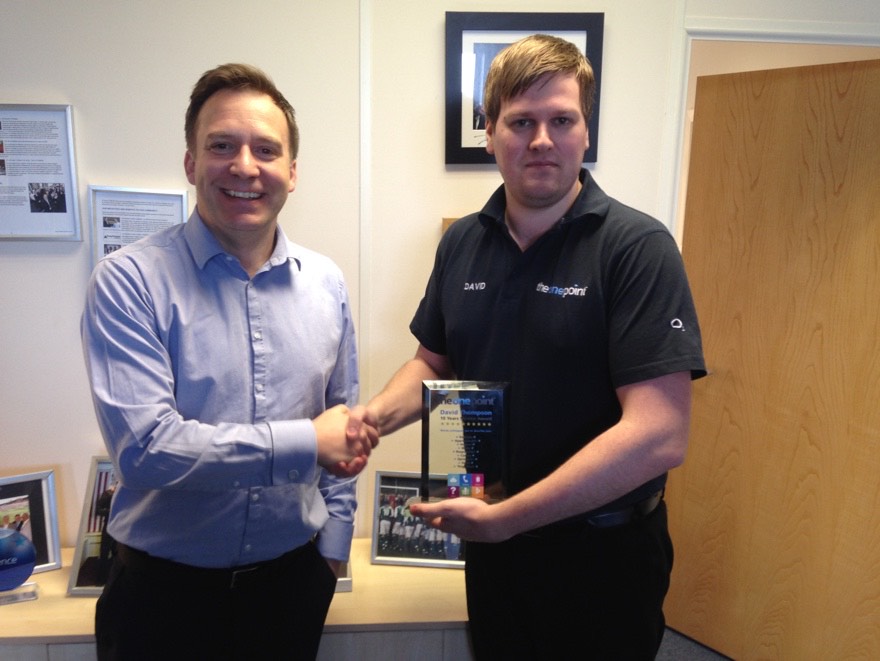 David Thompson had worked in various job roles ranging from customer service to telesales when he found The One Point’s job advert in a newspaper back in 2006.

David (since nicknamed Tommo) decided to ring the number on the advert and bagged himself an interview with The One Point’s then office manager. By the time Dave had got off the bus home, he’d received a call offering him a trial day at The One Point, and the rest is history.

Dave started his journey with The One Point by simply processing orders and then following up with customers over the phone. Fifteen years later, Tommo now heads up the mobile team while simultaneously supporting the sales team and providing training.

We sat down for a chat with Tommo to discuss his journey over the past 15 years.

So, you’ve just celebrated 15 years at The One Point; how does it feel?

It feels like it hasn’t been 15 years; it’s gone by very quickly. It’s scary how time flies, to be honest, but I’ve enjoyed it. It’s been nice to be a part of something that is continuously growing. I’ve been trusted to take on so much more year on year, which is a great feeling. Martin [Lauer] started The One Point a few years before I joined, and it’s grown massively since then; it’s now an entirely different business, so it’s been a fascinating journey.

What are the most significant changes that you’ve seen over the years since you started?

One of the most significant changes I’ve seen since I first joined The One Point is the move from being just a mobile business to being an award-winning managed technology company. When I first started, The One Point was a purely mobile business, nothing else. The One Point eventually moved into the B2B market and introduced IT, telecoms and digital services to its offering over the years. I’ve witnessed a huge moment in The One Point’s history when we became an O2 Direct Partner. In all of the 15 years that I’ve worked at The One Point, I have never once seen the business stand still; it’s always striving for the next best thing to provide the best for our customers – it’s just great to be a part of that.

What are your most memorable moments working at The One Point?

That’s a tricky question; I honestly can’t pick just one. I’ve enjoyed so many things over the years. Some include attending events such as Devil’s Kitchen run by the HEY Smile Foundation or being a part of the O2 rewards day at the office; the list goes on.

What was your proudest moment in the past 15 years?

Probably up until now, it was my 10th anniversary with The One Point, which is ironic now I’m celebrating my 15th anniversary! But overall, I suppose my personal growth over the time I’ve worked at The One Point is something I’m proud of too. I was 19 when I first joined; since then, I’ve bought my house, got married, and had my two daughters; as clichéd as it sounds, I’ve grown from a boy to a man while working here. Ultimately, my proudest memory is just the whole journey – I can look back and say, “Look how far I’ve come.”

You’ve got a reputation within The One Point for going above and beyond for our customers. Tell us about the customer on the train.

There was a customer with an issue with their device, and we managed to get it sorted and back to them on the train platform in Hull about two minutes before the train set off. We didn’t have to rush and do that, but we did, and that’s what makes The One Point the best; we go above and beyond.

What piece of advice would you give yourself if you could go back to the day you started?

Probably to not be as quiet. I wouldn’t say I’m the loudest person, but back then, I was a different person altogether; I was really shy. I hadn’t had a lot of life experience when I first joined The One Point, so I was pretty introverted, whereas I’m much more confident now. You learn as you get older that if you don’t ask, you don’t get, and that’s something I had to learn and grow the confidence to achieve. So, 19-year-old Dave should have asked more questions and let people know how he was feeling more and grasp any opportunities he was given.

If someone wrote a biography about you, what do you think the title should be?

I’m a Scouser (Not sure if I’ve mentioned that before).