An Appointment With… An eye for a great website 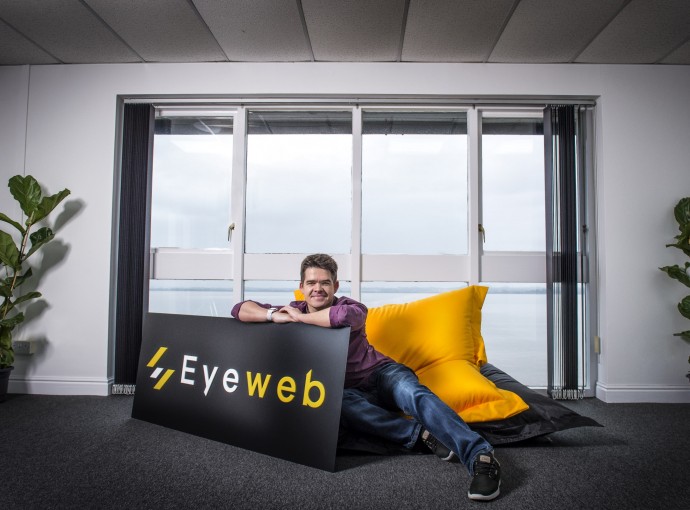 Paul began his career 18 years ago by moving down to London to gain greater experience in web design – back then, the capital was where it was at, if it was anywhere at all. But ultimately, he was “Hull through and through”, and wanted to come back up north and set up in his home city.
Paul realised that, while his strengths lay in web design, he needed someone who was more of a sales whiz, so he teamed up with his friend Shane Beardsley, and Eyeweb was born in 2003. Their HQ was a spare room at Paul’s flat in Kirk Ella, and as the company grew they moved into a tiny office at Shane’s business across the road.
In 2008, they joined Hessle-based Intragroup. However, a couple of years later, Paul decided to take control of the company and go it alone, buying the other shareholders out and moving to premises in Hessle Square. For the first time, Eyeweb had its own office space, its own signage – and its own identity. They weathered various storms including scraping their way out of some debts early on, but they survived, and at last began to find their feet.
At the core of the business was, and remains, their Mission Control CMS/CRM software, which they created and use exclusively to build customers’ websites. “USP” is an oft-used term, but in Eyeweb’s case Mission Control really is unique, and it’s endlessly customisable, meaning the resulting websites are unique, too.
“Wordpress is fine for millions of companies,” Paul says, “but for those who want something a bit more custom, and want to fully get control of their website, we feel Mission Control is a great option.” Eyeweb’s customers include Strata Holdings, Luke Campbell, Millhouse Restaurant, Dutch Imports and Morgan & Quinn.
A couple of years ago, they decided they needed some high-quality office space to match their high-quality web design offering, which had by now expanded into a one-stopshop providing digital branding, ecommerce and social media marketing services. They secured a studio at the Maritime Business Park in Hessle, which looks right out across the river Humber and boasts stunning views of the Humber Bridge. “Our new studio is a very modern and creative space which really impresses new clients,” says Paul.
Another big part of the business is its commitment to charity, and the new office has proved to be a great base for fundraising events including, last year, their first 24-hour gaming challenge; this year’s charity is Cash for Kids, and they staged their second annual event on February 28, 2019.
Aside from websites, Paul, Shane and new business partner John have another string to their bow – 15 years ago, they set up VW Festival, and it’s gone from a one-day show with 3,000 Volkswagen fans to a threeday weekend family festival at Harewood House, Leeds, attracting 21,000 people.
They continue to oversee the running of the festival, but fortunately, says Paul, they have a great team working on it year-round, meaning he can spend most of his time with his dedicated team at the Hessle office.
So, if you have a website project that needs an experienced and approachable team, you should have a look at www.eyeweb.co.uk and see if Paul and his in-house team can help you out.
Tel. 01482 628 830www.eyeweb.co.uk