Aliens, acrobats and a giant tortoise bring family fun to the city centre 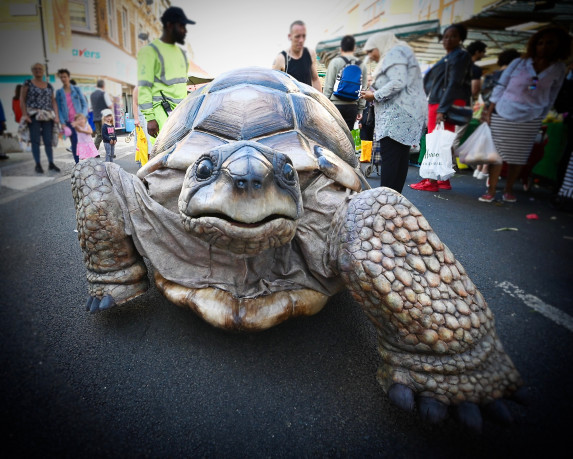 Hull city centre is set to come alive this weekend with an array of activities that promise to deliver family fun in a variety of socially distanced settings.

HullBID has followed up its Monster Hero trails that were so popular during 2020 with a Summer in the City package of street entertainment that starts this weekend and will feature music, comedy and all sorts of colourful characters and creatures.

There will also be the return of the Kitsch Market in the Old Town, and the weekend brings the Absolutely Cultured Creative Hull programme which will take place indoors and in outdoors spaces including parks and squares, and even vacant shops and other buildings.

Kathryn Shillito, HullBID executive director, said: “It’s looking like a weekend of fantastic weather and that’s come at just the right time because there is going to be so much going on in the city centre and that’s great news for city centre businesses who are looking forward to welcoming the crowds.

“Creative Hull has been in the calendar for some time and we are delighted to be able to join in the fun by presenting Summer in the City, which will run for the next five Saturdays and take place in different locations around the city centre.

“The Kitsch Market made a big impact when it was launched in May and is building the number of stalls every month, with a highlight on Saturday being a local round of the National Young Trader of the Year competition. HullBID has a long history of organising successful markets and it’s great to see one of our regular partners in those projects coming up with another take on the concept.”

Summer in the City will burst into life at 11am on Saturday with walkabout performances throughout the city centre by Are We Alien? featuring a combination of humour, theatre and improvised games, acrobats in a display of astounding feats of strength and skill and “What the Tortoise Taught Us” with Zelva the incredible, animatronic, giant tortoise giving life lessons from the wisest creature on the planet.

Summer in the City will continue every Saturday up to and including Saturday 14 August and future attractions will include sporting antics and 70s disco pop with Team Bgee, fitness and fun with the Wonky Olympics and animal magic from over-sized creatures including Lobster A la Cart and Plucky the very big, very friendly chicken.

Kathryn added: “With so much disruption to public events we’ve placed the emphasis on taking a safety-first approach by bringing in trails for families to enjoy as they wander round the city centre. The Monster Hero trails were a great success and we expect Summer in the City to be even more popular as people take to the streets to enjoy a wide range of music, comedy theatre and more from some superb entertainers.

“There will be the opportunity to see them from wherever you are shopping, or eating, or working. They will be difficult to miss…especially the giant tortoise!”

Julie Buffey, a member of the HullBID Board and the owner of the Roisin Dubh vintage and shabby chic shop in Hepworths Arcade, will welcome around 30 traders to the Kitsch Market on Saturday, with stalls extending from Trinity Square along Trinity House Lane.

After the success at last month’s market of visiting busker Lyvia, local musician Esther will entertain stallholders and shoppers on Saturday and one of the traders, jewellery-maker Kirsty Pridmore, will brave a sponsored head shave by Zinc hair studio to raise money for Dove House Hospice.

Julie said: “All the stalls were snapped up quickly and once again we were over-subscribed. People are really eager to get involved and they are rolling up their sleeves to make sure it is a success.

“There are six stalls run by people under 30 who are taking part in the local heats of the Young Traders Market 2021 challenge. We wish them all the best and we hope plenty of people come along to support them.”

The Kitsch Market will take place from 10am until 4pm on the second Saturday of every month for the rest for the year with the events on Saturday, August 14 coinciding with the beer festival in Hull Minster and the Folk in Hull at Trinity Square music festival. On Saturday, September 11, the market will tie in with Heritage Open Days, with some stalls located in the Minster.