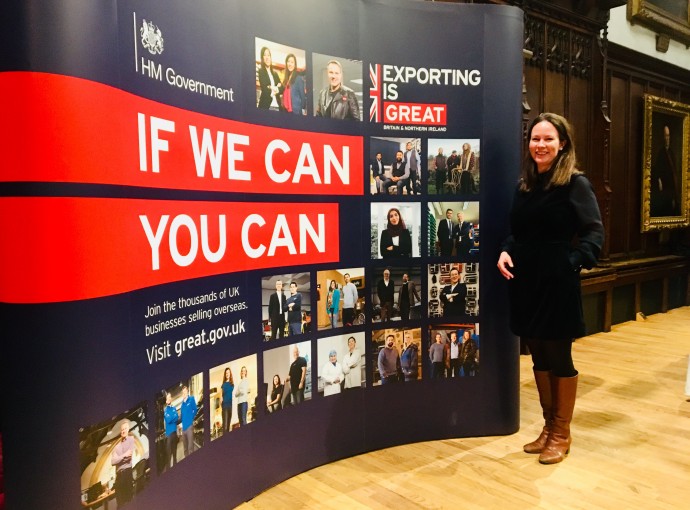 A company from East Yorkshire which is a leader in helping governments worldwide reform their health and justice systems has been appointed as a Northern Powerhouse Export Champion for 2019.

Agencia,
based at Hessle, was handed the recognition and the challenge to encourage
others after the company’s track record impressed officials at the Department
for International Trade (DIT).

Helen Gibson, managing director of Agencia, visited Durham Castle for a Board of Trade reception, hosted by the Secretary of State for International Trade Dr Liam Fox, which launched the initiative.

Agencia
was selected for the DIT’s “If we can, you can” campaign on the strength of its
achievements during 15 years of exporting, a period which has seen exports
account for more than half the firm’s turnover.

Helen
said: “We have worked across the globe, exporting our British healthcare and
judicial expertise to overseas governments.  Over half of our business is
international, and we are looking to grow our work in the Western Balkans and
South East Europe, East and North Africa and China.

“I’m
delighted that we have been selected to be a Northern Powerhouse Export
Champion for 2019. It is recognition of our efforts to expand our business by
exporting our expertise to 14 countries including Kosovo, Tunisia, Kenya,
Malaysia and Barbados.

“Being
appointed to this role is a real honour and a privilege and the launch event provided
an opportunity to hear a wealth of inspiring stories from fellow
exporters.

“It
means we are contributing to our local economy in Yorkshire and the Humber and
are now in a position to encourage others to consider exporting by sharing our
own knowledge and experiences.  I want people to know that if we can do it
– you can too!”

The
Export Champions initiative started in the North West in 2013 and was extended
across the Northern Powerhouse in 2018.

Businesses
are selected on the basis of their track record for selling overseas and for
the strength of the messages they can share with other companies through export
seminars or workshops.

Export
Champions also contribute to developing DIT strategies. During 2018, many of
them were invited to attend round tables with Ministers and to participate in
the Exporting is Great Hub and the International Business Festival based in
Liverpool last summer.