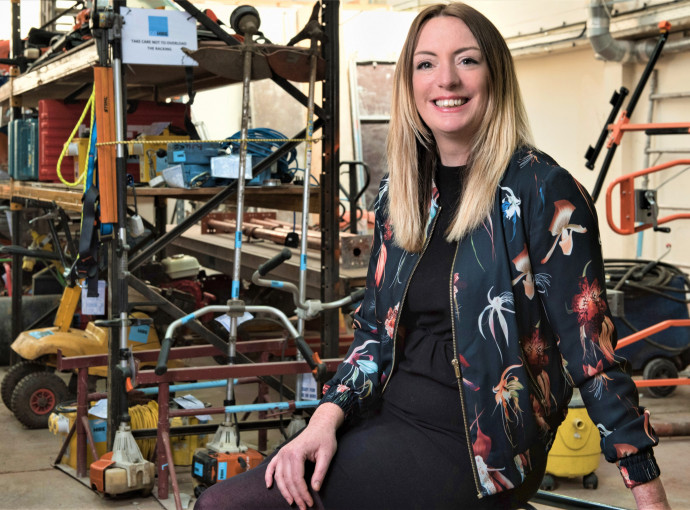 Sally Wray, owner of tool and equipment hire specialist GoHire, handled home schooling and feeding her staff and has now sealed two major acquisitions in the past month.
Martin Shaw (left), managing director of D3 Office Group, reaped the rewards of keeping in contact with customers and shifting the focus of his business. Between March and September he sold PPE worth £1.8 million – a market that had brought in just £4,000 during the same period in 2019.
Sally bought Arnott Plant Hire in January 2015. By the end of the year she had rebranded to GoHire and relocated to bigger premises in Goulton Street, Hull.
At the beginning of September this year she received a call asking if she wanted to buy the Grimsby branch of Caspian Access and Plant Hire. She completed the deal on October 1.
Now Sally has bought the former Sully’s social club in Chamberlain Road, Hull. Work will start as soon as possible on converting it with the aim of opening in January. Having inherited a team of three, Sally will employ more than 20 when the new sites are fully operational.
She said: “When the lockdown started we took the decision to stay open because some of our customers were essential workers but we went from being a buoyant business to falling off a cliff.
“Some staff were furloughed and some worked from home. I was fitting in home schooling, which is miles more difficult than anything I have ever done, and I was bringing food to work for everybody because they didn’t have time to get out.
“It was really quiet at first so we took the time to reorganise the warehouse and tidy up and gradually things started to build again. Our customers paid promptly, more than I have ever known, and there was a feeling that we were all in it together.”
The turning point was the heatwave in April, which attracted a lot of domestic customers.
Sally said: “We were getting calls from people doing projects in their gardens. They’d had refunds on their holidays and the travel industry’s loss was our gain. We are about 80 percent B2B but in April it was more like 50-50. It just got busier and busier and in May it was chaos.
“Grimsby was an opportunity that just fell into my lap. The call came out of the blue. Grimsby was part of my plan – it came a bit sooner than anticipated but was too good to walk away from.
“Chamberlain Road had been on the cards since the beginning of the year and we plan to open in January. We are 30 per cent up on last year. September was a record month and October could beat it.”
D3 Office Group, which has sites in Hull and Sherburn-in-Elmet, was hit as its furniture suppliers stopped manufacturing and its workwear business dropped to 10 per cent of normal levels.
Martin said: “We never closed because many customers were getting in touch and telling us how much they needed us, and we took a lot of heart from that. We were open, speaking to people regularly and they asked about supplying other things that they needed.
“Our biggest lines have been surgical masks and disposable gloves. Before this we only did them in small quantities and we didn’t know anything about that market but we learned quickly because we had to check the credentials and certification.
“The furniture side is now focusing on people who work from home. Employers realise they have had people sitting on kitchen chairs, and in the longer term they will need better equipment.
“They are also thinking what their office will look like in the longer term. They won’t have as many people but they still want a nice environment because it helps productivity. We have been asked about redesigning offices as well. It’s going to be more IT-led.”
Martin and Sally shared their lockdown stories during a Zoom event organised by For Entrepreneurs Only (FEO) in partnership with David Hall, co-founder of FEO and author of a number of business books including his latest, Telling Tales.
David said: “The idea was to bring together some of our entrepreneurs from Hull and East Yorkshire and hear their first-hand accounts of how they faced up to the threats posed to their businesses by Covid-19.
“GoHire and D3 Office Group are just two of the fantastic, positive stories that we heard. There were examples of great leadership in every case, positive mental attitude, a can-do mindset, being able to develop people, finding people within who can help, communicating with people and keeping the team onside.
“What we have seen and what we like most of all is that people in the audience picked up some ideas and actions that they might be able to take to their own businesses as the uncertainty continues.”