A marriage made in heaven 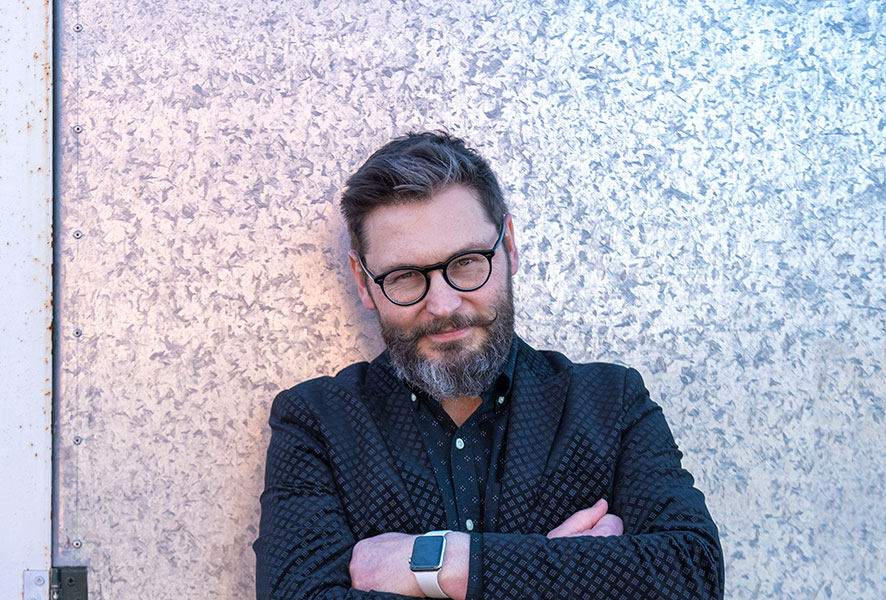 When Colin Foxall joined forces with Nigel Harte, it proved the catalyst for Nexus Creative to grow into one of the region’s leading marketing agencies, writes Jon Griffin.

It all began with a dictionary and a ‘drunken night’ in the Slug and Lettuce in Worcester – and now 25 years later Nexus Creative is one of the Midlands’ most successful and well connected marketing agencies.

Founder Nigel Harte still smiles at the origins of the Worcester business, a quarter of a century on from a drinking session that was to change his life.

“It was either going to be called Nimbus or Nexus. There were three of us and it was a drunken night. We had a dictionary, and Nexus means a committed group. It was a good night and we didn’t lose the dictionary.”

Well over two decades later Nexus is firmly established as a full service marketing agency, providing a range of business development assistance to a variety of clients throughout the UK, from SMEs and blue chip organisations to tourist destinations such as the Severn Valley Railway.

Today, the two men at the helm of Nexus, managing director Nigel Harte and commercial director Colin Foxall – a vastly experienced Midlands industrialist who cut his teeth in the advertising and printing worlds in the days before the likes of freesheet owner Eddie Shah and Rupert Murdoch transformed the landscape – can reflect on an enduring success story which has become a £1million turnover enterprise.

But it all began in rather more humble circumstances, thanks to Worcester-based Nigel, who had studied visual communications at university, and his student friend Rob Draper. Nigel says: “We were ex-students, into skateboarding and snowboarding. We thought we would start a magazine but it was a question of how to fund it.

“We started working on projects for the people we knew, in order to fund the magazine production but the projects soon turned into a full-time job and we never got round to producing a magazine. We created flyers for local businesses and were working with the local council, the swimming pool, the racecourse and sports centres.

“I was working in a kitchen paying off student debts but a local council three-day course on how to run a business changed all that!

“That period was an interesting time for the design industry, e-mail had not taken off so visuals were still printed out and delivered or posted to the client, so we spent a lot of the time at the beginning playing on the playstation waiting for the client to send back changes.  However things started to get serious when we were asked to work on a major skateboarding event held at Wembley Arena 1997 called Genaration 97.

“We did all the marketing material to raise awareness of it, working out of a back bedroom. However our stuff worked well and ended up splashed across the front of Wembley Arena!

“We got to the stage where we were running a business completely by accident. So I had to give up working in restaurants and bars and focused on the business as the way forward.

“We thought – why wait, let’s jump in with both feet, and learn on the job. It was a case of let’s do some design work, and if we can get paid for it, then all well and good.”

That decision proved a catalyst for the birth and growth of the company which was to become Nexus Creative – allied to the arrival of Birmingham-based entrepreneur Colin Foxall.

“I had been involved in creative industries all my adult life – I had run several private companies and one funded by an investment bank, but all involved design and marketing. I knew someone who knew of Nexus and I was a bit more experienced in business and able to advise Nigel and Rob on buying a business.”

Colin, born and bred in the Midlands, was able to bring a streetwise knowledge and hard-nosed business nous to the party after making his name many years previously – along with considerable profits – with several West Midlands based design, advertising and printing operations.

“I had started my first business when I was 22. It was digital work ahead of its time, we did reprographics, lithographics and page origination. The industry was still unionised, and although salaries were high so were the profits in the creative industries at that time. We did well.”

Colin teamed up with Nigel – a ‘marriage made in heaven’ as he now describes it – to pave the way for the purchase of Worcester-based web design and digital firm Creative Warehouse, bringing vital new impetus to Nexus in their home in rural surroundings at the Cider Mill and Stables in Norton, close to the M5.

Nigel says: “I was still naïve about how to negotiate buying a business. I was a creative director, producing stuff. Colin mentored me.”

Colin adds: “We complemented each other. Although we were 50-50 shareholders, Nigel was the founder of the business. We decided that Nigel would be managing director and I would be commercial director.”

Nexus eventually bought Creative Warehouse, with Colin advising on the sale. “I had built some great business relationships over a thirty-year period and with the help of some great bankers, accountants and solicitors and a lot of supportive people in the business community the purchase was completed.”

Nigel says: “Creative Warehouse moved in with us. It was web development at the time of the dotcom boom. Websites were still in their infancy and we were at the forefront, producing websites for PLCs, the Department of Trade and Industry and universities.”

As the world will still remember, the dotcom boom came and went – with a considerable number of casualties – but Nexus stayed the course to thrive and prosper.

Colin says: “We have watched the digital world grow and as a full service marketing agency we produce marketing elements to solve problems for our clients.”

A classic case study of the Nexus approach – highlighting the full value of the Worcester firm’s attributes – was work undertaken with the Herefordshire and Worcestershire Chamber of Commerce on a new website and with Midlands tourist attraction the Severn Valley Railway.

“We won the contract to produce both websites soon after purchasing Creative Warehouse and Nexus brought business expertise to bear, advising the railway on developing new revenue streams, e-commerce, ticketing and other digital marketing issues. It was a prime example of Nexus considering the end objective.”

Or as Nigel puts it: “Often clients know they need a marketing solution, but when the objectives are really explored, the end solution is somewhat different to that initially envisaged.”

And Colin says: “Often a client is considering a new website or a brochure, but the end goal is increased profitability. So for us it is about ‘how can we maximise return and achieve their objective through what we do? We have often thought of calling ourselves a business development and marketing agency.”

The Nexus roster of clients over the years in highly impressive, from the likes of the Environment Agency to Hilton Hotels, the British Chamber of Commerce and The Royal Air Force Association. Nigel says: “We have worked with many PLCs and many businesses and organisations trading internationally.”

Three years ago Nexus and Coventry University – after several years of business planning – won a substantial six-figure grant from the Government’s Innovate UK, an organisation sponsored by the Department for Business, Energy and Industrial Strategy to help further drive UK productivity and growth, realising the potential of new technologies to make them a commercial success.

The funding under the Knowledge Transfer Partnership Scheme aims to substantially increase Nexus’s turnover over a five-year period while Coventry University placed an honours graduate and expert in digital marketing and information technology within the business.

Says Colin: “Probably along with most of the business world, we realised some time ago that digital marketing and disruptive technologies would be paramount to most successful organisational development in the future.

“For any small business, including a commercial marketing agency such as our own, to be able to keep pace with the rapidity of change in the digital world is an enormous task, particularly when your clients expect you to keep them at the forefront of all things new and generate successes for them, through what you do.

“Therefore we realised that the only way to do that properly and excel at modern digital marketing was to link with the academic world and truly offer our clients and employees the best of digital training, information and cutting-edge marketing advice and the success that will be derived through that.”

At the time of the grant announcement, Dr Shane Walker, Associate Head of School, Enterprise and External Engagement at Coventry University, said:  “As far as we are aware this is the only digital marketing project of its type that has been awarded a KTP Grant. Nexus really have done well to secure this support.”

The Coventry University initiative is just one example of the Nexus mindset as the world of technology continues to reinvent itself, seemingly on a daily basis.

Nigel adds: “The plan is to work to optimise our digital skills and be able to pass them onto our clients. We are continually trying to develop systems and processes that we can sell on to our customers and the wider marketplace.”

But that constant striving for excellence and innovation does not come at the expense of the firm’s long-standing values, as Nigel is keen to stress.

“We are still a relatively small marketing agency which tries to be cost-effective and attentive to our clients’ goals. We are looking to build long-term mutually beneficial partnerships, it is about clients achieving what they wanted.  We do not want to grow to a size where it becomes all about turnover.”

And for a firm which spreads the marketing gospel, the Nexus approach is subtly understated. Colin says: “We try not to blow our own trumpets – but we aim to offer an intelligent, well-reasoned and creative solution for our clients.”

Nigel, 46, adds: “We are not particularly comfortable shouting too loudly about what we do, so to some extent being approached by BUSINESS is an unusual and unexpected situation for us.”

The two men at the helm of Nexus make an intriguing contrast – Nigel, the ex-student and rugby fanatic whose flair for graphic design kick-started the whole story and streetwise Colin, a football and gym fan whose flair for business added a key commercial element.

Colin, a youthful 66, aims to reduce his workload in coming years. “Over the next four years, I will gradually ease back. Nigel now does a lot of the stuff that I used to do in the past – he is a very accomplished businessman. We get on, it has been successful.

“I think we have created a great family atmosphere within the company, the team works brilliantly together.”

The story of Nexus Creative is testimony that ambition, innovation and constant hard work can pay off over a lengthy period to build something that lasts.

Or as Colin says: “We have had some tough times, nothing worth having usually comes easily, but we have done reasonably OK even through this dreadful recent pandemic. For many large and small businesses and organisations, it has been a difficult last few years and unfortunately Covid-19 has just been too much to cope with for many. We consider ourselves very lucky.”

But you rather suspect that, as ever at Nexus, they are just being a little too modest.