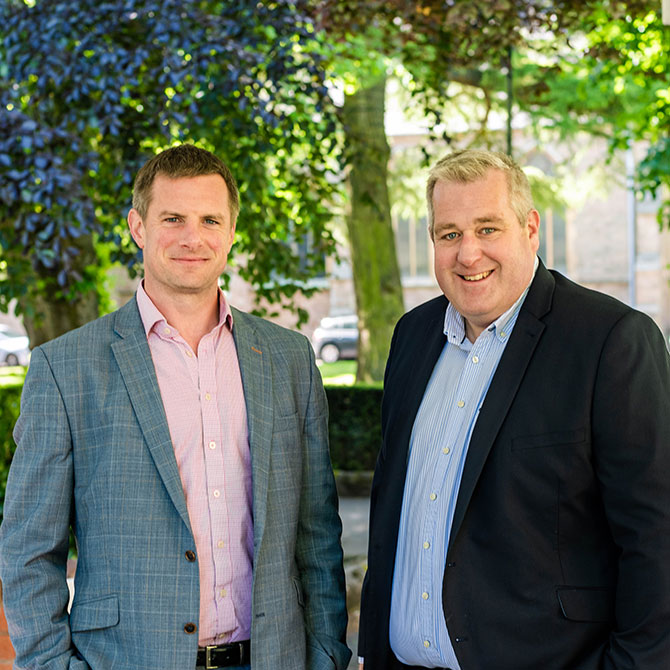 The John Truslove story began in modest circumstances more than 40 years ago – but it seems that the same business approach and principles have been largely intact throughout four decades of often bewildering change in the outside world.

Call it tradition, call it longevity, call it the human touch – there’s something reassuringly old school about Ben Truslove and Ian Parker as they reflect on all those years beavering away in an often volatile and unpredictable property sector.

In an increasingly corporate world where technology has frequently replaced the noble art of personal conversation, Ben and Ian at Redditch-based John Truslove, chartered surveyors and valuers, offer a refreshingly alternative way of doing business.

Says Ian: “It is a personal approach. If our clients have got a problem they will speak to us, we have built up a reputation for going the extra mile.”

Ben adds: “It is a broad spectrum. A client will ask us to deal with various different matters.

“You might let an office or you might end up doing a valuation on their factory, or a rent review on the shop they occupy.

“You are not going to the same office and sitting behind a screen every day, and you are meeting people. In our patch there are all sorts of amazing businesses that we get a bit of an insight into.

“I just love the variety. It is also a sociable job because you are always meeting different people, they trust us to be knowledgeable and feel comfortable talking to us about private matters. There has to be mutual trust. Clients often end up becoming more like friends.”

That trusting approach to business was instilled into the Worcestershire property outfit back in 1981 when, just two years into the Thatcherite revolution which was to irrevocably change the face of Britain and its industrial landscape, Ben’s father John started the business.

Says Ben: “The business was founded in 1981 by my Dad. It was originally a one-man band. He was a chartered surveyor who worked for Grimleys in Birmingham, and, after six years there, he decided he didn’t want to work for a big organisation.

“He started working from home and then he took on an office in Alvechurch. He took on a lot of the smaller, more technical tasks. He did a lot of valuations, advising private clients, sales and lettings.

“He brought all the knowledge and contacts from a big corporate and was a bit more flexible and independent.”

Says Ian: “He grew the business from nothing and we are still here now. I owe my career to him. He has been a great teacher, he has got standards and that is what is drummed into you.”

Ben adds: “Growing up, Dad would get me and brother Neil off to bed and then he would do another three or four hours work. If you ever woke up in the night he would often be in the dining room with all the files out – he certainly would have been working 14 plus hours a day.”

Ian, who joined the family firm in 1996, 15 years after it was first founded, says the work ethic inherited from John Truslove – who has now stepped back from full-time duties but still helps out long-time clients – continues to inspire the firm today.

“We work hard. Seeing what John has done, you put the hours in, you put the hard work in and you get the rewards. I remember getting our first computer, with internet and email on it. That is what has changed massively, email and marketing properties online.

“You used to wait for the post to arrive. Now it is mostly email requiring an instant reply.

“Historically if we were valuing a property, we would often speak to other agents, other surveyors. A lot of valuers now just want to go on a computer programme and there is limited interaction with people, and that is a big loss.”

Ben adds: “That was always one of the big appeals of the business – it is people-based; you have competitors but there is mutual respect.

“There is a lot of transactional data that you can share with each other if you actually talk, whereas if you just download a PDF off the internet, you miss so much.”

But it would be wrong to dismiss the two joint managing directors at John Truslove as at odds with the modern world, notwithstanding their views on the need for a touch of humanity – and indeed humour – in the business.

Says Ian: “We first invested in software in 1988 and have continually upgraded, most recently in 2021. You can be taking instructions on a property and within half an hour somebody the other side of the world can be watching a video and looking at sales particulars.”

The need to embrace change and adapt has served the firm well down the years throughout recessions, the banking crisis of 2008-09 and more recently Covid, which, notwithstanding its impact on the UK economy, saw John Truslove enjoy a record turnover year.

Says Ben: “Over the years we have expanded and made some strategic acquisitions. The last one was A Victor Powell, an estate agents based in Bromsgrove established in 1946, another family firm, second generation and the brothers were looking to retire and wanted a reputable firm to hand over their clients and their property management portfolio to so we took them under our wing.”

Ian explains: “It is a way of developing the business and looking to expand, by acquiring other local firms – we have done that consistently over the last 40 years.”

Ben adds: “It has always been measured, it has never been all guns blazing, let’s grow, grow, grow at all costs. It has always been about making sure that we find something that is a good fit. We have looked at other things and decided not to go ahead with them because it has not been quite right.”

That measured approach at John Truslove has clearly paid dividends down the years – and the company has been drawing up plans to celebrate more than 40 years at the sharp end of the property market with a celebration dinner in the atmospheric surroundings of Ragley Hall, near Alcester.

That occasion will see them celebrate record turnover during the Covid years, somewhat ironically given the catastrophic effects of one of the worst pandemics in history.

Ben adds: “We worked hard. We made sure we were always available for clients, produced video tours and conducted viewings when possible.”

Ian again: “We did some lettings where we had to respond quickly. We did lettings to the medical industry supplying sanitizers and other products and they often had to be up and running within a month. The fact that we were open for business and physically here helped.”

Ben adds: “We are trusted by the clients to vet tenants, so we always meet the people, get accounts, talk about their business background. We strive to be a safe pair of hands for the landlords to make sure they are not letting the unit to someone unsuitable.”

The ability to adapt to changing circumstances – whilst maintaining traditional values – would appear to be a key to the longevity and success of the firm founded as a one-man band by John Truslove back in 1981.