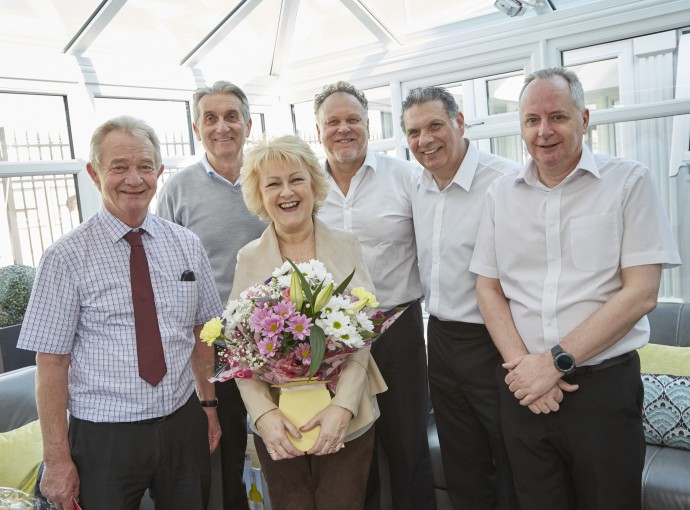 The six staff members have been with the firm throughout every decade of its operation since it was established in 1971.
In that time they have seen the business grow from a small local double-glazing provider to an established national leader in the home improvement market, supplying homes and businesses across the country.
Paul Moss, Dave Watson, Steve Kohler, Philip Histon, Dave Nuttall and Janet Nuttall were each invited to a special presentation with directors and colleagues to celebrate their achievements.
And EYG’s joint managing director, Nick Ward, said their commitment to, and knowledge of, the business made them all stand out employees of the firm.
“Between these six employees they have clocked up more than 250 years’ combined service which is absolutely amazing dedication. Five of them were teenagers when they joined, and Philip just 21,” said Mr Ward.
“EYG has certainly changed greatly as a business since they each walked through the door for the first time. What hasn’t changed over that time however is the need for us to find, and keep, skilled, reliable and diligent employees who take pride in their work and represent our business professionally at all times.
“One of the greatest strengths of any business is not only having good employees, but having good employees who feel attached to the business, who are proud of its history and dedicated to doing the best for it at all times.
“We are extremely proud of the large number of people we have across the business who have been here not just a few years, but for decades, and these six loyal employees have been here the longest of all.
“They are achievements which we felt deserve recognition and most importantly, a huge thank you. Such dedication, loyalty and long service is rare in any workplace or industry. Without doubt, the commitment of each of them has contributed significantly to the success of the business over the years.”
Each of the six employees, who were given gifts including vouchers, champagne, flowers, a 40-year service pin badge and an EYG teddy, is able to look back fondly at long and varied careers at EYG.
Paul Moss started at the firm aged 18 and fitted windows from Hull before moving to the Scarborough branch, which he now runs as installations manager.
Processing manager Dave Watson joined aged just 16 in 1979 and initially worked in roles including office junior, on the switchboard and in service department before moving onto processing domestic jobs.
Steve Kohler was just 15 when he joined in 1975, working his way from the factory shop floor to his role as factory manager today. Philip Histon, who joined in 1978, started making single-glazed windows and has worked in the firm’s aluminium factory, UPVC factory and the glass shop which he now runs as manager.
Dave and Janet Nuttall provide the firm’s “love story”.
Surveyor Dave was recruited as a glazier from a supplier in 1973 at the age of 19, while Janet joined aged just 16 and has since gone on to doing everything office based, from typing, invoicing, wages, quotes and sales to her role as a processing coordinator today.
The couple met at the firm and married in 1977.
EYG began trading in 1971 and now employs more than 300 people. Having started out as window specialist it has developed into a leading national home improvement firm offering bespoke extensions, orangeries and conservatories.
The business, which also has a commercial division supplying windows and doors for major hotel, health, residential, and educational developments across the UK, turned over more than £24m last year, with sales of more than £14m to domestic customers.