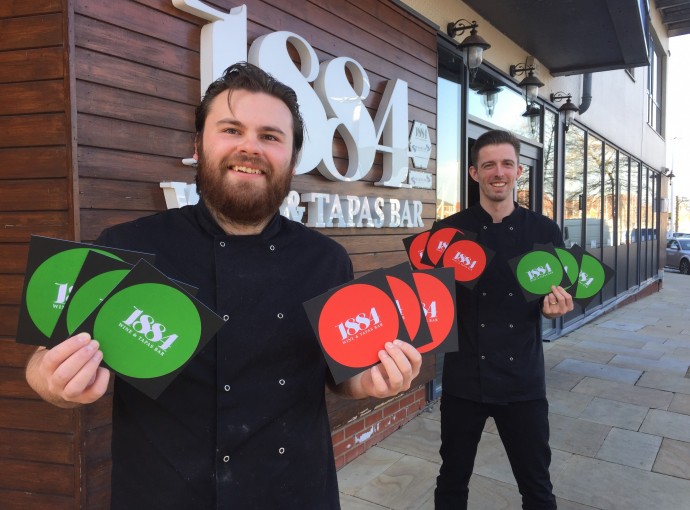 1884 Wine & Tapas Bar, which opened at the corner of Hull Marina nearly four years ago, has revived its hugely popular green card deal as an April special and has completed an overhaul of its waterside outdoor dining area.
Cucina 1884, which opened in Hessle in November 2018, will soon add outdoor seating and tables, increasing the capacity of the restaurant at the corner of Ferriby Road and The Weir.
1884 Wine & Tapas Bar was inundated with bookings when it first unveiled its green card deal only six months after opening in 2015 and Deborah Spicer, director of the restaurant, said heavy demand was again expected for an offer which will only run during April.
She said: “It is a really good deal and after viewing the price and the menu a few people have said we must be proper April fools! But it’s a great way of introducing people to our food and to the tapas style of eating.
“Hopefully we’ll get some fine weather to go with it and we can build on the rush of business from recent weeks by expanding to the outdoor area on the quayside. The beginning of the year can be a difficult time for restaurants but we’ve recently hosted a business supper club, charity events for the Impact Appeal and the Viola Trust and a Mother’s Day celebration for around 100 people.”
The green card menu is being launched alongside a revamp of the main menu and offers an initial order of a dozen dishes for £40, which then includes additional plates served two at a time until diners decide they’ve had enough and signal a stop by turning their cards from green to red.
Deborah said: “It demonstrates our unhurried approach to dining – it’s not about all you can eat, it’s about taking as long as you like to savour as many of our dishes as you want while relaxing with views of the Humber Riviera.”
Cucina 1884 is counting up a series of firsts after opening to great acclaim and rave reviews for its stylish surroundings and its array of high-quality dishes which are also simple and affordable.
Jane Cook, director of Cucina 1884, said: “We opened just in time for the Christmas rush and were very busy from the start. A lot of people had watched with interest while the transformation of the building was taking place and they were eager to give us a try.
“Now they’re more familiar with what we do and with the variety that we offer. The finest quality ingredients, making our own bread, pizza dough and pasta as well as dried tomatoes – not sun-dried but dried overnight in the pizza oven!
“Some were apprehensive on seeing the design with the combination of tables and counter service, but they’re enjoying the flexibility in terms of food and price, with classy dinner options, lighter and quicker dishes which are idea for lunch, and coffee and cake for elevenses and afternoons.
“We’ve found our feet and we’ll be looking at a few changes as we go forward. Our first Christmas enabled us to show what we are capable of. Mother’s Day was our first Sunday opening and there will be more on Easter Sunday and the following two weekends. Our first business supper club is coming soon and now we’ll be adding a dozen seats outside, complete with heaters, for our first summer, taking our capacity up to 60.”