£1.5bn Lagoon Hull project ‘will transform the future of our region’ 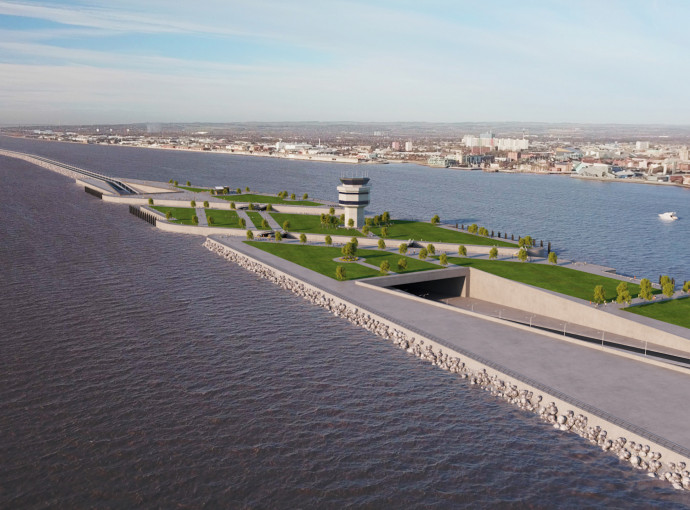 Lagoon Hull is a development of a scale not seen in the area since the Humber Bridge was constructed in the 1970s.
It will include a seven-mile southern relief road built on the Humber Estuary, providing a route for through traffic between Hessle and Hedon Road.
This will create a lagoon that will form an attractive new destination for waterfront living, working and visiting and deliver flood protection for the city.
It will also support regional economic growth, creating about 14,000 jobs through the western dock’s regeneration, a new outer harbour and port facilities.
The cost of the project is estimated to be about £1.5bn, which will be met through both public and private investment.
It has wide-reaching benefits including flood protection for areas beyond Hull on both the north and south bank of the Humber and the strengthening of the Energy Estuary.
A study by the University of Hull found that if the lagoon had been in place during the 2013 tidal surge, the city of Hull would have had 100 per cent protection, with the rest of the estuary seeing an 80 per cent reduction in flood volume.
Researchers also looked at how a repeat of that event would affect the area over the next 100 years with sea levels predicted to rise. They found that if the same tidal surge occurred in 2108, when sea levels are expected to have risen by one metre, the lagoon would continue to provide 100 per cent protection for Hull with the rest of the estuary seeing a 33 per cent reduction in flood volume.
Although further feasibility studies are required to confirm these results, engineers working on the project are confident Lagoon Hull will play a major role in protecting the whole of the Humber region against future tidal surges.
Economic studies have predicted Lagoon Hull could unlock the potential to add £1bn GVA (gross value add) to the region’s economy annually, which will also add weight to the case for investment in the project.
Lagoon Hull therefore plans to attract existing Government spending commitments that would be repurposed for the project.
A report by Highways England has suggested journey time savings alone of £300m would be realised by the new road, which will ease congestion on the A63 and around the city as well as improve air quality.
Complementary to existing plans to upgrade the A63 at Castle Street, the new estuary road  proposed for the lagoon will address travel needs beyond existing requirements and further reduce separation between the city centre and its riverfront area.
Located to the east of the city, close to the Siemens factory, the new outer harbour will in addition support a low-carbon future to help protect against climate change.
It will do this by providing the scale of sites needed for the renewable energy sector to further develop the port infrastructure required for the next generation of offshore wind.
Existing port terminals and operations will continue to operate as before, but with improved road connections and more opportunities for growth and expansion.
The concept is the brainchild of businessman Tim Rix, who tasked engineer Paul Hatley, of structural expert Alan Wood and Partners, to test the feasibility of the idea.
Now, after three years of research funded by donations from companies in the area, the initial plans are being released as the project moves on to its next stage.
A not-for-profit company has been set-up, chaired by Mr Rix, which is now seeking support to begin further feasibility work.
This feasibility work is expected to take between five and 10 years once funding has been found with the build itself expected to take a further five years to complete.
A launch event at the Deep, was attended by more than 150 people who will hear more about the project from Mr Rix, including Emma Hardy MP, Lord Haskins, and Mr Hatley.
Mr Rix said: “The Lagoon Hull project is a once-in-a-generation opportunity to transform the future of the region.
“It addresses the key challenges of today and unlocks our region’s potential for future economic growth, for placemaking and creating a city and region where not only will young people want to stay and build their lives, but that attracts new and talented people to live and work.
“It does all of this while at the same time, protecting Hull and the wider estuary from tidal flooding, even taking into consideration a rising sea level as a result of climate change.
“Lagoon Hull is an incredibly ambitious project, but one with so many potential benefits, I feel everyone should get behind to help make it become a reality.”
Paul Hatley, Lagoon Hull project director, said: “Tim and I have invested several years into this project already and along with the University of Hull and other valued partners have carried out a lot of research and modelling into the effects of Lagoon Hull on flooding and on the estuary as a whole.
“All indications are that it would fully protect Hull from tidal flooding now and in the future and would hugely reduce the effects of tidal flooding on other areas of the estuary, including the south bank.
“Although further studies are required to absolutely confirm this, we believe we have collected enough evidence to justify Lagoon Hull being looked at by central government, and if our findings are confirmed, we’re confident this project will have profound, positive consequences for the future of our region.”
Visit lagoonhull.co.uk for more information.